My veteran speaks to the D.A.R.

On Tuesday this week, I could have been the lead mediator at small claims court. Or I could have gone to a marketing gathering for our business. Instead, I went to the monthly meeting of the Rainier Daughters of the American Revolution (D.A.R) in Seattle. My husband Art had been invited to be the luncheon speaker, and I went along as his support as I usually do when he speaks.

Our friend Teresa asked Art to be the luncheon speaker  months ago. She knew he was a Vietnam veteran, and served in the Marine Corps, and Tuesday was the 240th anniversary of the creation of the Marine Corps. She also knew that Art and I had written a book about our 2005 visit to Vietnam.

D.A.R membership requires documented proof that a woman is descended from a man or woman involved in the Revolutionary War. I have such proof myself, but I have no interest in becoming a member. I'm not much of a joiner and my interests are not in patriotism or politics. The Tuesday luncheon was the first D.A.R event I have ever attended.

That day I recited the Pledge of Allegiance for the first time in at least five years. I led the group in reciting the Preamble to the Constitution of the United States (there was a card to read it from, but I memorized it in high school and still remember). We then went through a pleasant pasta-and-salad buffet.

The 25 women were about our age. They looked like the kind of women my mother would have liked - well dressed and attractive. I'm more casual about my own appearance - much to my mother's distress, even when she was elderly and I was a grandmother myself. But the few women I talked to before the lunch were friendly.

The last time Art talked about his Vietnam story, he was speaking to a group of veterans. His presentation was intense and tough - perfect for his audience. This time he was talking to women. I had suggested he speak to them as if they were his sisters. He did. He began with, "How many of you have friends or family members who are Vietnam vets?" Most of the women raised their hands. "And how many of them have talked to you about their experience?" Only one hand went up, and the rest of the women shook their heads.

Then Art talked about his experience. He was a radio repairman at Da Nang during the Tet Offensive in 1968, and one day he and a few other non-combat specialists created an undermanned platoon to guard a gate, and they ran into a battalion of North Vietnamese.  That one day affected Art for the rest of his life. In talking to the women, Art went right back to 1968 in his head, and he took the entire audience with him. Not a sound from the women for the 20 minutes he spoke. Just shock and sympathy. When he completed his talk, a few women came up to him, and one approached me to thank me for taking good care of him! I knew Art's adrenaline level was very high and that he would be exhausted within a couple of hours.

We had traveled to Vietnam in 2005 - me for the first time, and Art for the first time since 1968. We were part of a group led by a psychotherapist who specializes in veterans with PTSD. After our return we wrote a book about our experiences: Return to Viet Nam: One Veteran's Journey of Healing. We had brought along a few copies to sell. I made a note to myself to download the app that will allow us to take credit cards. 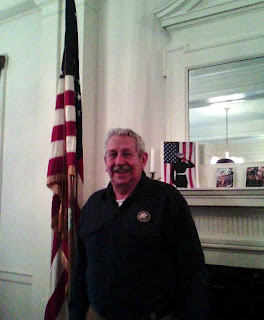 On the way home I asked Art if he'd just as soon not do these speaking engagements, since it was emotionally difficult. He said, "No. It's important that people know." In our book, he says, "If just one vet, in hearing my story, can get rid of his nightmares, it will be worth it."

Thank you for your service, Art.
Posted by Linda Myers at 12:58 PM

Sharing and revisiting these events are good for our veterans, and for their families too. ONce their stories are told, there is a sense that they can put the past on a shelf, and get on with life.

Your husband is brave to share his story when it takes an emotional toll on him. As he said, people need to know.

It sounds as if it were a very profound experience for Art as well as at least some of the audience. I join the chorus to thank Art for his service, and you for taking such good care of him. :-)

As noted by the audience response, few of us get to hear first hand stories on Viet Nam experiences, or other war experiences either. It is obviously difficult to talk about, but these stories need to be shared. Thank you to Art and you for doing just that.

I have to hand it to you both for the important work you do and the good you share.

As some who (I admit it) weaseled his way out of the army (first a student deferment, then a high lottery number) I respect anyone who went to Vietnam. I'm glad people want to hear his story. So ... I was unable to get the book on kindle; the connection seemed to be broken. Can you fix? Thanks!

I read the book and found it very moving. And this reminds me that I need to forward it to a good friend who is a Vietnam vet and still suffers greatly from PTSD.