Beneath the Northern Lights: Lady Aurora!

I'm here in Churchill, Manitoba because seeing a sky full of Northern Lights has been on my bucket list for decades. Because I'm with a Road Scholar group, I'm also learning about polar bears, astronomy, ecology and biology of the far north, the mosaic that is Canada (rather than the melting pot that is the US). And I am reconfirming that Canadians are a class act.

Three days ago we viewed our first Lights. They were mostly pale in the sky, greyish white. I had expected green and red. Our guide, Ron, told me that the human eye can't see the colors because at night we see using the rods in our eyes, and they see only black and white. The cones, which see the color, are for daytime use. "Well, how come the photos of the Lights always show vivid colors?" I asked. Ron said, "Because the camera's eye can see the colors."

I wondered why I had never known that. Why people who raved about the Northern Lights had never mentioned it. For a while - that night and the next morning - I was disappointed and a little ticked off.

I distracted myself a bit with other activities and the weather. So cold here! Yesterday the high was -3F. We were pulled by a snow machine to a nearby spot in the boreal forest as we learned about snow shelters and had a chance to try them out. 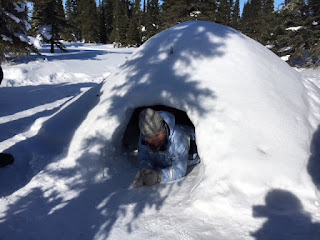 Several of my fellow travelers tried snowshoeing. They all fell. I've had a previous experience where I did the same thing, so I chose to walk the half mile back to the Churchill Northern Studies Center, where we are staying. The sun was bright and the air was very cold and it was delightful.

Then, last night, the Aurora was out again. I watched for a while from our dorm room, then went down the hall to the dome observation room. I climbed the metal spiral staircase in the dark to the top, where I could see the whole night sky.

Those Lights were like a sentient being. They moved across the sky, in ripples and curtains, pulsing to our right and left, in front of the moon and around the Big Dipper. The palest of green with an occasional palest of rose at the fringes. I was transfixed. The last time I remember feeling this way was four years ago, in a land rover, amidst a family of elephants in the Masai Mara in Kenya. Spiritual, you know.

These pictures were taken last night by our guide, Ron Waldron. His eyes saw the same as mine. His camera saw differently. 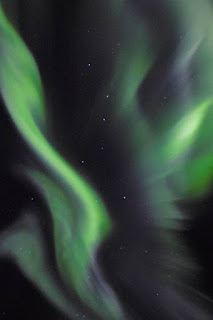 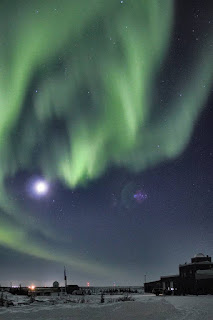 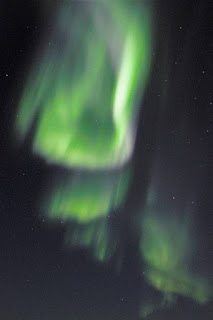 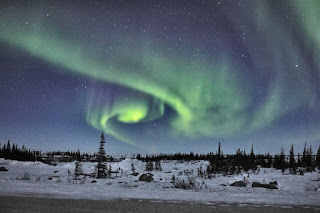 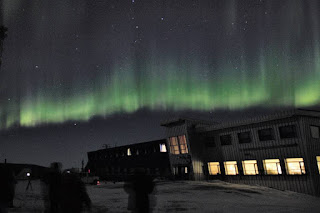 It's nearly 11 p.m. I'm waiting for Ron's voice coming down the hall saying "show time" and knocking on doors. If it happens, I'll put on a robe over my pajamas and head for the dome to watch Lady Aurora one more time.

No colors at night? Who knew.

I think that I would have been disappointed also that there was no color. Still, it still must be marvelous to witness such an event.

Those pictures are beautiful! And it does sound like a spiritual experience to see Lady Aurora. :-)

Beautiful photos, I had no idea that we can't see the colors. I haven't seen the aurora in years since I lived in Northern Saskatchewan. Difficult to see here in the city.

I saw them when I was a child and I could have sworn they were in colors. Perhaps it was at dusk. Too long ago to remember for sure but I do remember how amazing they were. So glad you are seeing them.

I have always wanted to have this experience,and am a little disappointed to know that the colors we see in photographs are not what the natural eye sees. Even so, I will keep it firmly on my bucket list. Thanks for sharing your experience.

Shocked to hear there are no colors!!!

Dear Linda, thank you for sharing the photographs of the Northern Lights and for explaining what our eyes can see of it at night. I really responded to your words about the US being a melting pot and Canada being a mosaic. I'm thinking I like Canada's analogy best because it allows for differentiation and individual distinction. Peace.

That was a lovely series of posts Linda, I hope your friend is recovering from her pneumonia.

We live in Calgary and I've only seen the aurora once, but the night we saw them they were brilliantly coloured! Greens and pinks and purples from horizon to horizon. Maybe they have to be especially bright to be so colourful. I remember thinking that I could understand how early man could fall down and worship them. Over 45 years later they continue to be the most awe-inspiring sight I've ever seen.

And I too agree with the difference between the USA's 'melting pot' and our 'Mosaic'. As an immigrant I can say that in Canada immigrants are encouraged to retain their pride in the positive aspects of their heritage, while adopting Canadian values of equality and respect for others. Diversity is seen as an energizing force here, not a threat. Not that we don't have our problems, prejudice against our First Nations People is still too high, but as a Nation we're trying hard to improve that.

It was -24 in Calgary this morning. You caught us all in a "warm" spell. I grew up in the SW US, including four years in Phoenix, and my older brother lived in Tucson for years. What a contrast!