On my way to the Northern Lights - part 2: Winnipeg

The Fort Garry Hotel is down the street from the Winnipeg train station. It's a grand old building. Our room is 220 square feet - about half the size of our park model in Tucson, but seems very spacious.

There is snow on the ground here, temperature around 32 degrees. Not too bad. It has been a long time since I have worn a coat. Here is a view from our hotel room. 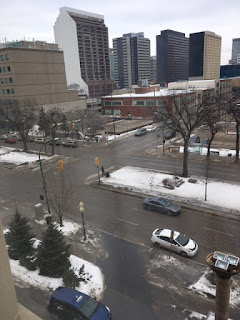 We were driven here late Saturday evening by a Sikh driver. I said, "Do you own this taxi or do you work for a taxi company?" He told me his story. He's lived in Winnipeg for 20 years, raising his family. He paid $200,000 for a half share in his taxi, and now, he says, it's worth nothing. Lyft and Uber are coming into Winnipeg, he says, but even before that business from the airport is not as good as it used to be, because people used to have only one car and now they have more than one, and when people arrive at the Winnipeg airport they are picked up by family or friends. He has to pick up odd jobs to survive. But if he went back to Delhi, India, there would be no work for him, and besides, his kids are Canadians and don't want to go. So he is focusing on raising his kids.

It's amazing what you hear when you ask an open-ended question.

Yesterday we went to the Canadian Museum for Human Rights, a short walk from the hotel.  I am not much of a museum person, but this one held my interest for two hours. I have a fabulous 12-second video of the Welcoming Hall, but apparently it's too big to be uploaded here. I'm messing around with UTube for the first time ever. Stay tuned!


Our Road Scholar group met up for dinner. Two couples and the other 19 all women. Many, like me, came here without their husbands. My Art said, "Why should I spend all that money to freeze?" Apparently the Northern Lights are mostly on women's bucket lists.

The Manitoba Museum this morning. This time we took a guided tour rather than exploring independently. It was a good idea. Canada's history has some distinct differences. Apparently its people collaborated with the First Nations in mutual business interests before Canada became a Dominion, and the nation now appears to be more welcoming of immigrants. Maybe that was the tour guide's optimistic opinion.

Our luggage has to be in the hotel hallway tomorrow morning at 5 a.m. Our flight leaves for Churchill at 7:00 a.m. I've decided to wear my insulated pants, thermal socks and boots, shirt and fleece vest and warm jacket and hat and gloves, but not the long underwear. Not yet. Tomorrow's high in Churchill is supposed to be 16F, and 1F the day after. That will probably be the long underwear day.

I need to learn from you and talk to strangers more. You learn so much that way. Thanks for sharing with us.