On safari: Going to the animals: Aberdare National Park

We left the city and journeyed north to Aberdare National Park. We made a stop for lunch at Aberdare Country Club, originally the homestead of an English couple that settled in Kenya. Our destination for the night was The Ark, a hotel within the national park built next to a water hole, but that accommodation is traditionally accessed by a bus from the Aberdare Country Club -  from the days of British colonialism when access to the area was reserved for British royalty and other VIPs. We were allowed to pack only an overnight bag; the rest of our luggage was held at the country club for our return the next day.

At the country club we saw a family of warthogs. The babies were darling! Who'd have guessed? 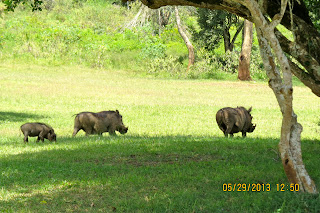 On the way to The Ark we came upon a family of elephants. 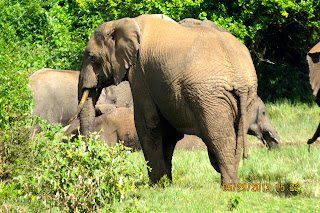 We also saw two troops of baboons, and a small contingent of impalas - a buck and four does, and a lone oryx.

Once at The Ark, we settled ourselves at one of the viewing windows. There's a watering hole below, and the staff puts out salt to attract the animals. 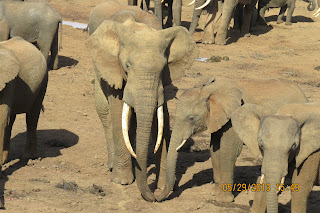 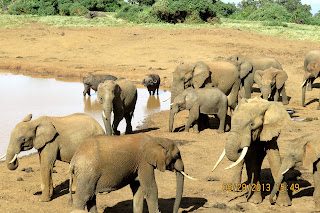 The Ark has a webcam at the watering hole; if you're interested in seeing what's going on right now, check it out.

Besides elephants, we saw rhinos and cape buffalo. Late-night observers also saw a leopard. Art was up several times during the night with "traveler's disease"; through the window of our room he saw a hyena and a white-tailed mongoose.

I'd heard that elephants have a social community, but I'd never observed these animals except in a zoo. Watching them at the watering hole, though, I could really tell. Babies stood under their mothers or were watched out for by other elephants; young males sparred. The movement of these animals was fluid and unhurried. We were fascinated.

Now I am super jealous. I love elephants. What a treat to see them in their own environment.

You are having a wonderful time, I can tell. Thank you so much for the pictures! I am fascinated by elephants; they are such interesting and intelligent creatures. :-)

This is fascinating! I checked out the web cam, too. Amazing! Thanks.

What a wonderful variety of wildlife!
Thanks for sharing.

Wow, that has to be the best experience ever. I am going to check the web cam now. Thanks.