On our first day Art was recuperating from his bout with "traveler's illness"; on the third day it was my turn.  But we had a couple of afternoon game drives with Peter, our driver/guide. 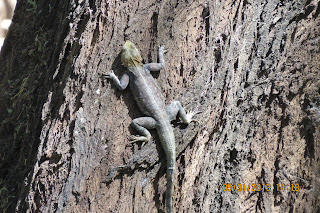 This Grevy's zebra was alone, an uncommon sight. It's distinguished by its white belly. 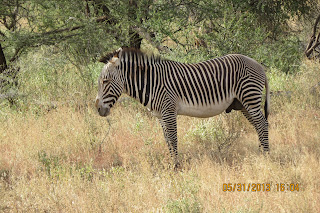 See the zebra? It's on the left. 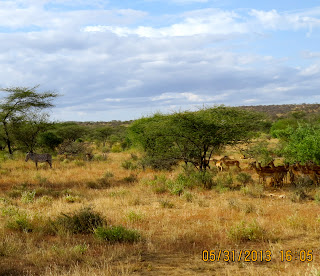 Members of a troop of baboons. 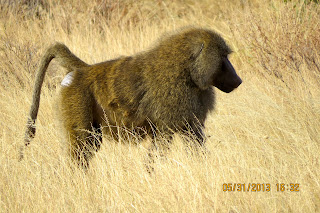 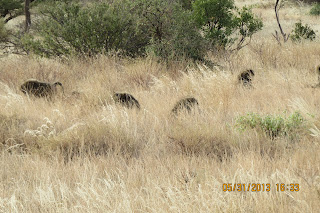 For a baby baboon's first three months, it clings to its mother's underbelly. For the next three, it rides on its mother's back. After that, it's part of the troop on the ground, staying close to its mother. 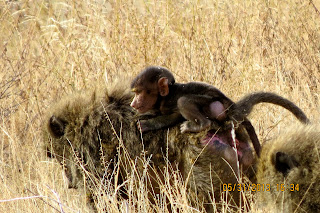 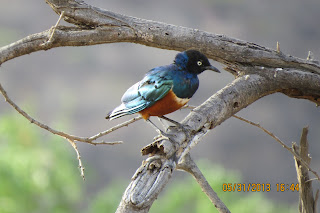 Giraffes from a distance. 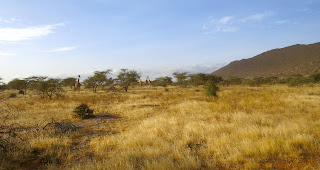 Getting closer to the giraffes. 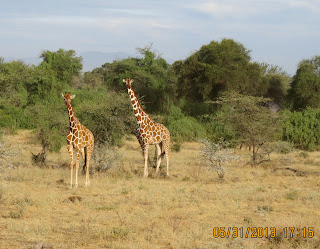 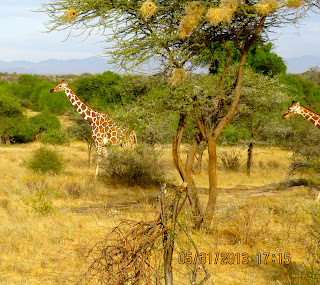 Remnants of the weaver bird. The male makes a nest and hangs from it upside down, waiting for a female to come along. The female checks out the nest and decides upon a mate. She lines the inner test and the birds made. Thereafter, the male leaves the female and starts building another nest! 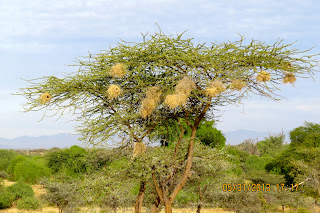 Elephants will eat the sausage tree fruit when it falls to the ground. 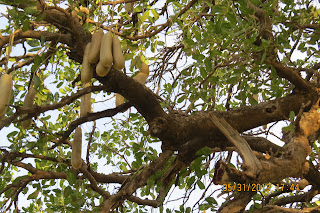 The elusive leopard! A good hider. Six safari jeeps searched for this female; we found her just before dusk, with her baby. Leopards hunt at night to avoid competition with lions in the same territory. Leopards are solitary animals; the male leaves the female after breeding, and the female raises her young along. 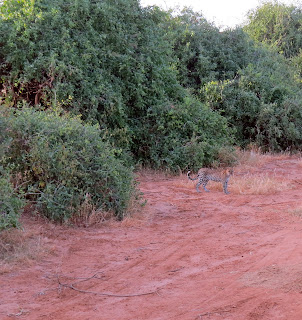 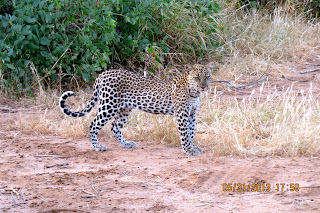 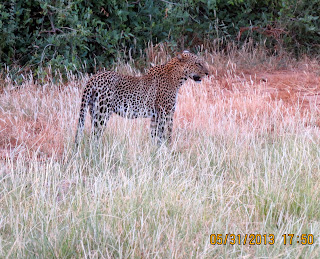 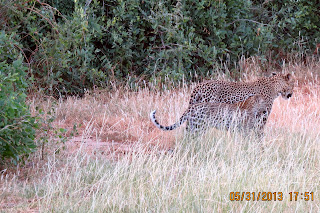 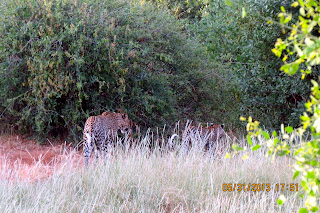 Waterbucks may graze with other herbivores such as impalas and zebras. Each species has a different way of recognizing predators; with multiple species together, all the animals benefit. 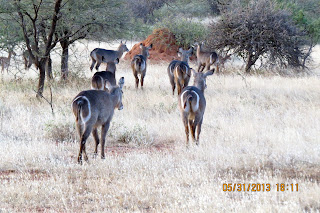 An anthill. Eventually this tree will die. 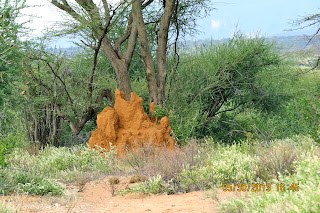 A community of elephants. We got to within ten feet of these beautiful animals and hung out there for over 15 minutes. 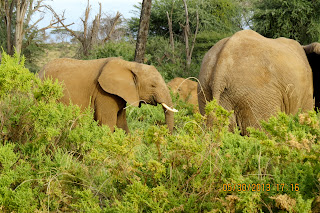 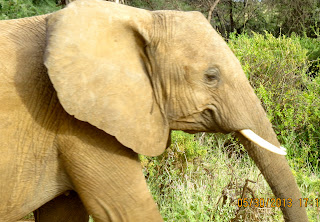 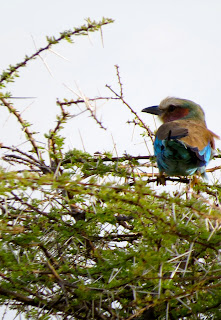 A dik dik, the smallest of the antelopes. This is the only antelope that mates for life. 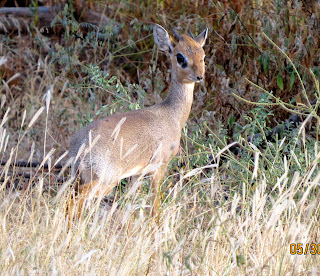 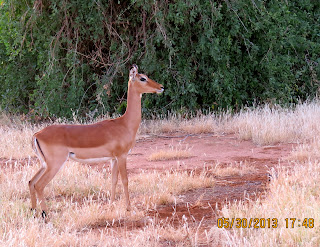 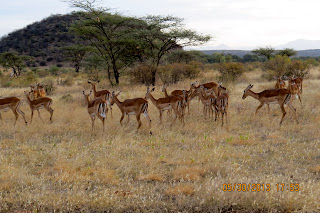 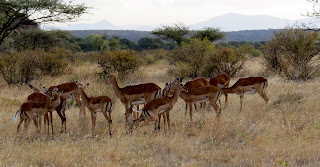 On our way out of Samburu on the last day, we had one more game drive. We'd heard a camel had been killed by a lion the day before. The camels live on the other side of the river, but apparently this one had crossed the water, to his peril. The guides talk to each other in the evening, and by radio, so Peter knew where to look to find the remains of the camel.

We passed by a crocodile. These animals have no sweat glands, so they open their mouths to cool off. 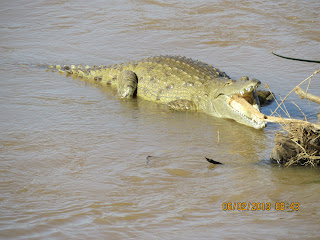 As we approached the site of the lion kill, we saw it was clearly marked by a tree absolutely full of vultures. 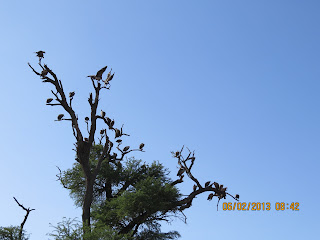 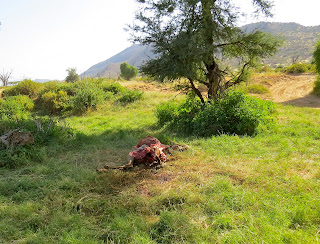 Peter explained that the vultures wait until the lion has had its fill. Then other scavengers come around to share in the feed. At the end, the hyenas eat the bones. It's a very efficient system, the wilderness.

A short distance away, a cheetah had been sighted in an open area. We found it without much trouble. Sometimes a couple of safari vehicles parked near each other is a good indicator! The cheetah was sitting quite still in the grass near a small tree. Peter told us the cheetah was beginning its hunt. It could see a couple of gazelles about 400 yards away. The best distance between a cheetah and its prey is much shorter; though the cheetah can run 60 miles an hour, it's a sprinter. So the animal approaches stalks its prey quietly and patiently until it's within 33 to 98 feet, a range with a good possibility of success. Over the 15-minute period we watched, the cat moved forward twice, never taking its eyes off the prey ahead. We would like to have stayed to observe the whole hunt, but we had a schedule to keep on departure day from Samburu.

Beautiful pictures, Linda. I may not always comment, but I am following your trip closely. And I do hope you are both feeling better.

First of all, let me just say that I am so excited to think that you are actually experiencing all of this up close and personal. Secondly, your photographs are just wonderful. You have captured sights so well. You truly are having the trip of a lifetime.

This is just astounding!

Africa is not a continent on my to-do list, but the wildlife and scenery are awesome.

Thanks for taking me to place I am not likely to see in person. And, I hope and you are Art are recovering from travel-related stomach issues!

Your photos and commentary are wonderful, Linda. I watch a nature show with the grandkids (Wild Kratts on PBS) which does a lot on the animals of Africa. I've come to love them; cheetahs are among my favorites.

Ooh Linda, you've taken some fantastic shots. Thanks for sharing.

Wow, what a feast for the senses! Thanks for sharing with us.

Those leopard shots are spectacular, Lindal. You are definitely earning your safari stripes. Sorry about the traveler's illness, though.

What a wealth of animals you saw today!

Travelers illness sounds unfair. It could at least wait till you get home.
What wonderful shots and commentary. I was a bit surprised at the species that believe in single motherhood. Good for the dik-diks and those others that who travel in herds.
You really are having an adventure of a lifetime.