On safari: Samburu Intrepids Club - in and around the lodge

Disclaimer: Art is taking all the pictures on this trip!

Here at Samburu Intrepids Club we really feel like we're in Africa. The main lodge section is built from logs, with an open-air roof. The rooms are permanent large tents atop wooden platforms by the river. Inside our tent is a queen-sized bed and a bathroom. Our tent steward, Duncan, does "turn-down service" for us each evening. That includes draping mosquito netting around the bed so we're enclosed and protected from any insects that might be present (we've found one spider and three ants in our sink, but nothing else). In the morning, Duncan brings us coffee and cookies with our wake-up call. When we're out of the room in the morning, he straightens the room and ties up the mosquito netting around our bed. We have enough space to do our exercises and strew our usual travel clutter about the room.

When we first arrived we were told that vervet monkeys would try to get into our tent. To prevent that, when we were leaving the tent we should zip closed the inside and the outside doors, set the welcome mat upright against the tent, and secure it with the small table on the deck just outside our tent. Apparently the monkeys don't have the body strength to move the table! We were conscientious in following these instructions.

On our second morning, Duncan brought coffee and cookies to our tent with our wake-up call. We'd decided to skip the morning game drive because I'd been up in the night with my turn for "traveler's illness". Duncan left the tent, zipping it closed behind him. Five minutes later I opened my eyes. The first words out of my mouth for the day were, "Art, there's a monkey in our coffee." A vervet monkey had unzipped the tent and was grabbing all the sugar packets. Apparently, to the monkey, a sweet treat trumps people still being in the tent!

Later that morning, in a conversation with Duncan, I learned he is of the Luo tribe, the same as President Obama's father. I had brought an Obama T-shirt from the 2008 campaign. I asked him to give it to his daughter, Joy Margaret. Duncan lit up. He said, "She will be overwhelmed." He said he would tell her it is a gift from Mma Linda from America. I knew I'd find the right time to give this T-shirt to a Kenyan.

We spent hours during the day on the deck, watching and listening to the happenings on the other side of the river. The far bank is not on the game reserve; we were watching the activities of the Samburu people who live there. The Samburu are semi-nomadic pastoralists. Cattle, sheep, goats and camels are very important to their culture and way of life. 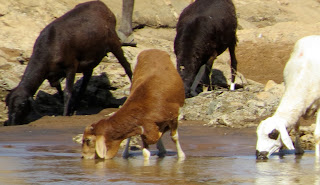 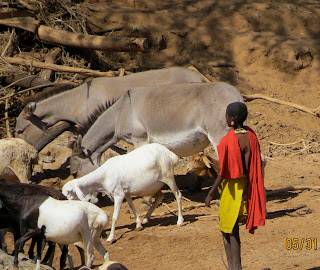 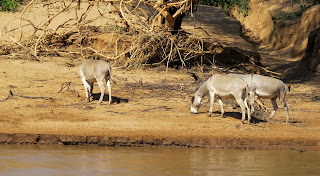 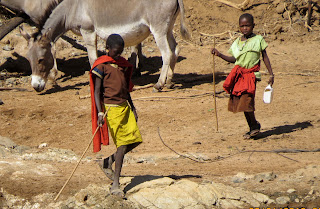 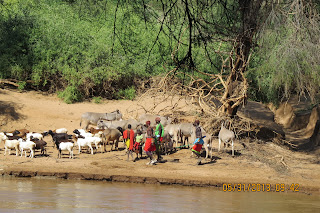 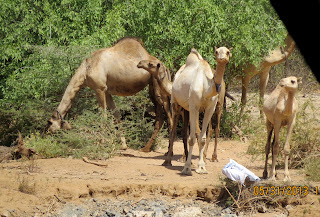 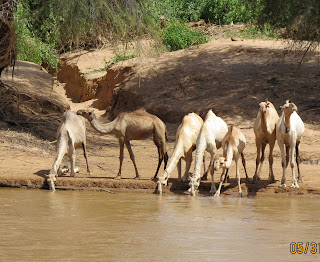 The resort staff was attentive and friendly. A Samburu naturalist took Art and me stargazing one night; it was the first time we had ever seen the Southern Cross. Another Samburu man played his flute at meals; another carried a slingshot to keep the monkeys away from the eating area. Still another cared for an orphan ostrich living at the resort. 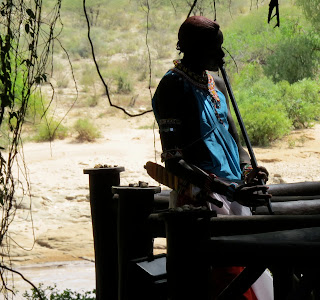 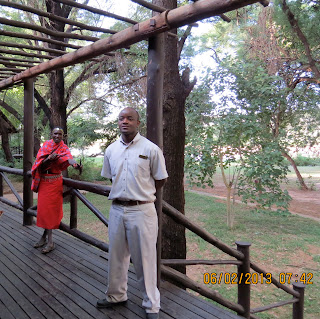 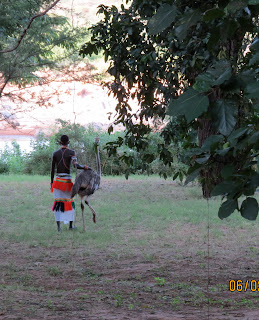 We were told to bring insect repellant along. So far we haven't needed it - or the socks I packed to cover my feet at night. However, it is warmer than I expected here at Samburu - in a dry climate - and I am wearing my safari hat every day. And always, always sunscreen!

Art is doing great with the camera, and I've been really enjoying the pictures. The narrative, too, Linda. Hope you are now over your illness. This place sounds so different from any place I've ever been to! Exotic fits, don't you think? :-)

What a wonderful holiday, a real sensory treat! Have a great time.

That seems like a nice down time day but still plenty interesting. What a cool gift of the Obama shirt. That child will be the envy of her friends.
Interesting about the monkeys. One thinks of insects, spiders and deadly snakes in Africa but thieving monkeys never crossed my mind.

There's a monkey in the coffee... what a wonderful thing to be able to say... :)