On safari on the farm: The Kenana Knitters

After we left Flamingo Hill, we stayed a night at Kembu Cottages. They're only about an hour's drive from Lake Nakuru, but we'd asked George, our outfitter, for a night on the farm that includes these cottages as a lodging opportunity.

The farm is owned by fourth-generation British Kenyans. Andrew and Zoe are the current proprietors of the cottages. Here's the website for the farm.

We stayed in the Acacia Cottage. It was the first time in a week we'd stayed in a lodging with actual walls! Rather than a dining room, we were served dinner and breakfast in the conservatory area of our cottage. Art especially enjoyed a fresh salad, though we'd been warned to avoid eating raw vegetables with their unfamiliar microorganisms.

Art was tired that afternoon, so he begged off a tour of the farm. I'd have to do without his photography. A guide named David took me first to the dairy; it's a modern one, with electricity and a backup generator for 16 milking machines. They have several hundred cows. As we neared the dairy we could see the area where calves are housed and fed. I asked David how old the calves are when they're separated from their mothers. He said two days old. I asked if the calves cried when they were separated; he said yes, for a day or so. I asked if the mothers cried; he said yes, for a couple of days. I know it's necessary for commercial dairies to separate the calves, but it still makes me sad, like I want to stop drinking milk. I don't, though.

David took me to see the horses. The farm has 120 thoroughbred mares and two stallions. Every horse I visited was friendly. David's father cares for the horses; I met him as well.

I spent some time at the Kenana Knitters. We'd been encouraged to visit this place, a women's cooperative at the farm. A woman named Evelyn explained the process to me. Various colors and textures of yarn are spun by local women and brought in. I could see by the sample card that some colors are organic and some use chemicals. Women are given patterns for the products and do the knitting at home. When an item is completed they bring it in and stuff it. The quality control requires that each item be able to sustain 15 pounds of pressure per square inch. Both the spinners and the knitters are paid in cash for their work.

Evelyn introduced me to Patricia Nightingale, the third-generation British Kenyan and mother of Andrew. Patricia manages the store that sells the knitted products. Patricia told me that years ago, a local woman established a community of woman spinners. Then the local woman died, and there were spinners with no market for their wool. "I'm not a marketer, but I'm a sewer. So I converted some sewing patterns into knitting patterns for the local women." She has several hundred local women knitting for Kenana Knitters. I told Patricia I commended her for the work she was doing for the local community. Her business card reads "Homespun, hand-knitted woollen gifts and accessories". You can reach Patricia at kenana.knitters@gmail.com.

The Kenana Knitters website does a wonderful job of describing the farm and the Knitters. My friend and neighbor Jennie is expecting a baby. I wanted to buy a gift for her at this shop, and I knew she would want something without the chemicals. I bought four items there and could have spent more, but Art had only given me 3500 Kenyan shillings for my outing. I spent all but 300. It's probably just as well he  wasn't with me on the farm tour! 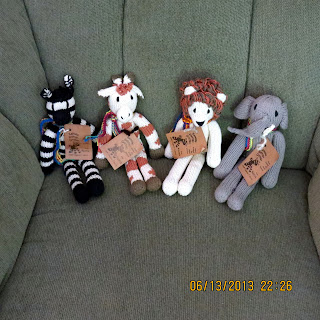 Just beautiful little things, Linda. I'm glad you have them to remember this wonderful time. :-)

Many thanks for the suport shown for the project on your blog, we are so glad you enjoyed your time here and we loved meeting you.
All the best