Another sunrise game drive the next day. We wanted to see what had happened to the lions. 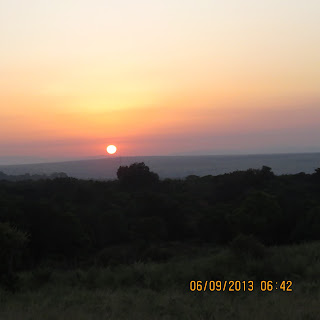 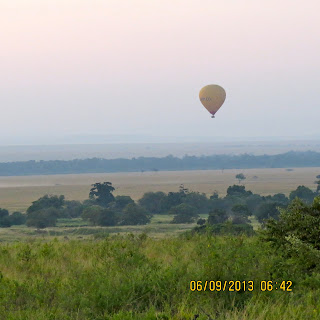 The pride was still hunting. When we first came upon the lions, they were quite close to a cape buffalo, who was more annoyed than afraid. Peter told us that predators will usually hunt animals a little smaller than they are. This buffalo was too big. 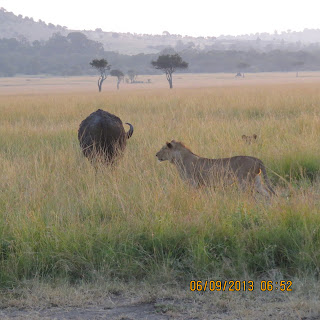 The lioness moved past the buffalo. 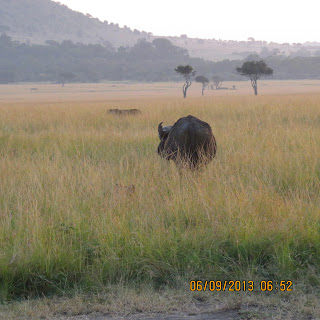 A hyena showed up, watching. 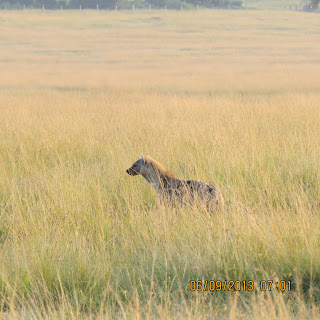 The lions were focused this morning. Looking around. 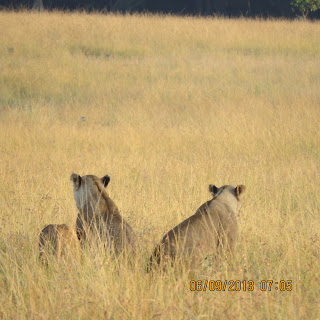 They saw a warthog. I'm thinking it was too small for nine lions to share. 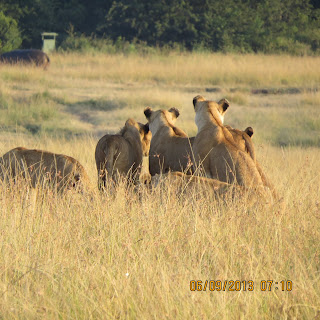 A herd of zebras approached the pride. The zebras did not see the lions. 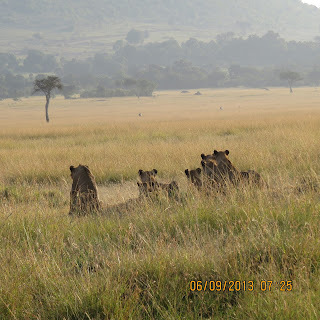 The two lionesses crept closer to the zebras. Art kept his camera on the lioness he could see. The other one descended into a ditch beyond his view. She must have stayed in the ditch as she advanced, because the next thing we saw was her emerging from the ditch, at a run, narrowing the gap between herself and two zebras who were playing and slightly separated from the rest of the herd. One zebra ran away and the lioness pursued the other. It wasn't more than ten seconds between the time the lioness left the ditch at a run and the time she brought the zebra down.

Peter said, "She got it!" He turned the key in the ignition and we raced toward the kill site, followed by half a dozen other vehicles. We arrived about 30 seconds later. The zebra was already dead. As we watched, the rest of the pride arrived. 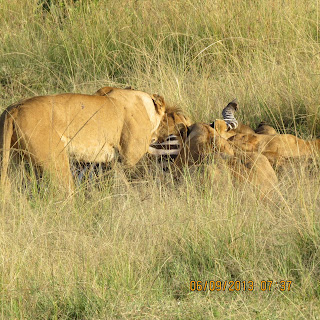 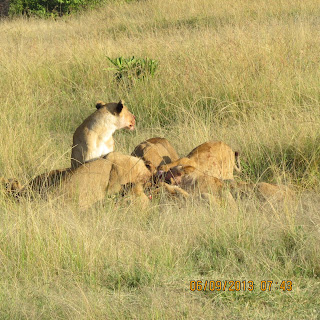 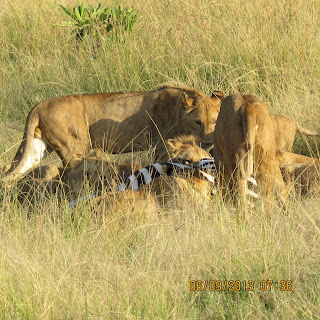 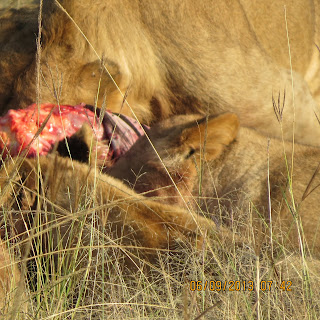 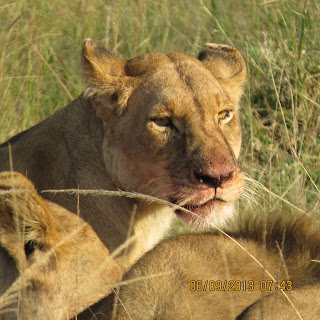 More vehicles were arriving, and the area was getting congested, so Peter suggested we yield our spot and drive around for a little while and then come back. 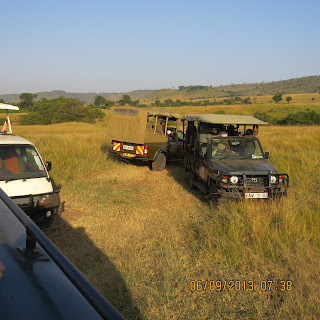 A hippo, out of the water. Peter told us they graze during the night, then go back to the water in the morning. Apparently this one was running late. 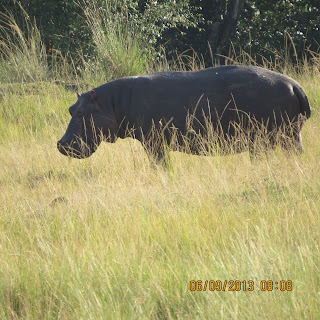 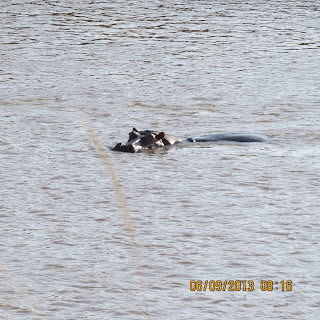 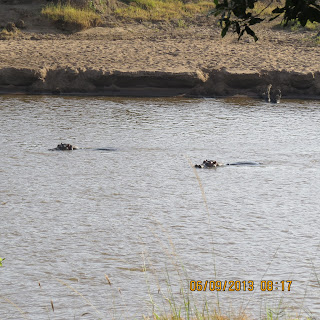 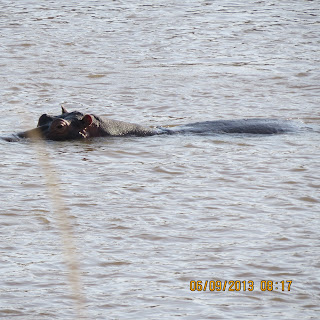 This baby gazelle has just been born. The mother hasn't risen to her feet yet, but the baby has! When a female is about to give birth, she leaves the herd and goes off alone, returning after the baby has been born. 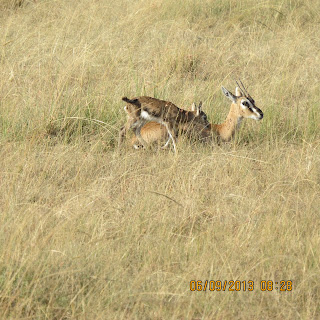 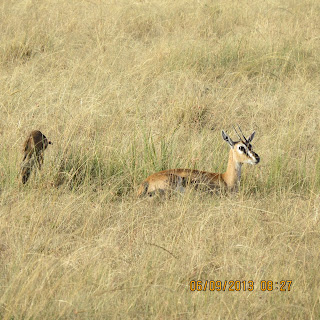 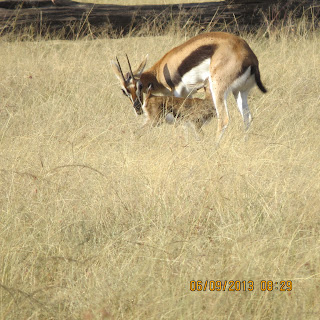 We passed a hyena with a piece of meat in its mouth. Wonder where he got it?


We drove back to the site of the kill. The last two lions were leaving. And there was nothing left of the zebra. No carcass, no bones. Not even blood on the grass.

Later in the day I talked to a man at the camp whose vehicle had arrived at the kill just as we were leaving. He said there were three hyenas there one minute and about twenty the next. One darted amidst the lions and grabbed a piece of meat before it was chased out by a lioness. There followed 15 seconds of lions roaring and hyenas barking, and then the lions ran off - maybe because the pride included cubs and the hyenas could have harmed them. The hyenas made short work of the remains of the zebra.

Peter told us he hadn't seen a lion kill in two years. "They stalk all the time," he said, "But you have to be there at just the right time to see the kill. And it may be at night."

Guess we were lucky. Unlike the zebra.

Oh, you told this very well, Linda. I didn't want to stay around to hear about the kill, but I'm glad I did. You were indeed lucky. Unlike the zebra, as you said. :-)