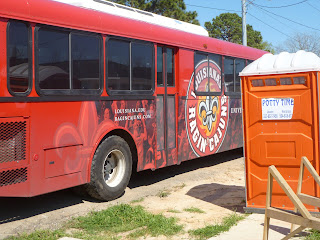 I'd decided to pace myself so I'd be able to get out of bed tomorrow. And I did! The sun was out and it was about 74 in the heat of the day. Our group of 20 Road Scholars arrived at the job site at 8 a.m. We broke for morning and afternoon snacks and for lunch. Most of the men worked on the flooring for the attic 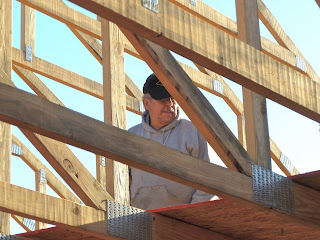 and most of the women measured and nailed blueboard (form insulation, called Tyvek where we live). 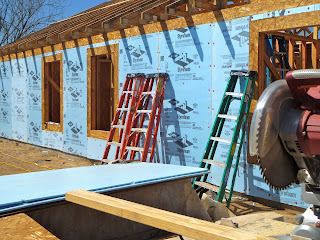 I chatted during breakfast with a woman named Ellen. She's a widow and originally from New Jersey. After her husband died, she wasn't able to get her life going again. She finally went to a therapist, who told her after several visits that she needed to move to a new place and start over. Ellen found a website called "Find Your Spot", where you take a quiz on your interests and preferences. She took a road trip to check out her top four places. She found Fayetteville, Arkansas and told me she really likes it there and yes, starting over had made all the difference for her.
This morning, Ellen was working with the men on the flooring. One of them lost his footing and, when she reached out to help, she fell through unnailed boards to the floor below. The paramedics came and took her to the hospital. We hear tonight that she has a compression fracture of the spine. From what I read online, she'll need bedrest and medication and maybe a brace for a period of time. I hope I read correctly. Apparently this is the first injury the Habitat crew and the Lafayette Road Scholar program have had.
The Habitat crew foreperson is a young woman. Laurie has a degree in architecture and has applied to Tulane to earn her Master's in building design. We talked about the Katrina tragedy in the Ninth Ward of New Orleans. She told me many people left the area after the hurricane. Even before then, many of the houses were rentals. After Katrina, the landlords often sold their properties to developers. When people didn't move back, the developers decided not to build. Apparently there's lots of political conversation happening around this, but not much else. I'd thought it might be a racial issue, but apparently it was more economic. At least, that's my understanding now.
Before dinner the group went to the Martin Accordion place. Several generations of Martins build accordions and also play them. I'd thought the idea was a little hokey but instead it was fascinating. The father "Papa", his daughter Penny and his grandson Joel played bass-slide guitar-accordion for us, demonstrating Cajun and zydeco music. Many families have lived in this area for generations, and the music gets passed down. It isn't written down anywhere, though, so you wind up with multiple variations. It was a very cool way to get introduced to the culture of this area. 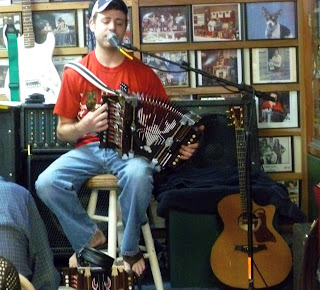 Well, you had quite a first day on the job! How awful for the woman who fell. I hope she has some friends for support in her new life. She's going to need someone to look after her.
We loved the Cajun and Zydeco music when we visited New Orleans about seven years ago.

Ah, that's how life goes in your neck of the woods.

What an experience you are having.

I would like to thank you for sharing your thoughts and time into the stuff you post!! Thumbs up

Yes, I echo the thenks for sharing sentiment. It's a good thing you're doing and I'm glad you're including us. The accordian family reminds me of visiting in County Clare, Ireland where traditional Irish music thrives and gets passed down to the young. Listening is great fun!

Glad to hear you are hanging in there. I had a compression fracture in 1981 from a bicycle accident, and I was in a brace for a few weeks. It was not a fun time, but I healed up completely with no residual problems.

I am enjoying this adventure of yours, Linda.

My heart goes out to Ellen. Here she makes a dramatic move only to have this happen. I too hope she has a support group somewhere to help her recover. I have put her in my prayers.
Kind of a scary start for you. This really is a great thing you are doing and I commend you for it and look forward to your updates.
I love zydeco.

What good work you're doing! And such an interesting adventure. Good for you -- and your co-workers! I hope Ellen feels better soon.

Fascinating to keep up with you on this adventure. Look forward to hearing more.

I so admire what you are doing. My heart just breaks for this woman named Ellen who injured her back as she fell. She seems like a very courageous woman. I hope she also has a good support system since it seems she reaches out to others.

very pleased to find this site.I wanted to thank you for this great read!!