Four of us women worked off the primary Habitat site today. A few miles away there's a Catholic church whose parishioners have donated the money to build a house. The walls of the house will be built this Saturday in the church parking lot and later moved to the final build location three blocks away. Our group's job was to build a work table for Saturday's builders. We loaded 12 plywood boards and 16 trusses into the back of a trailer. With two women carrying each piece of plywood and three carrying each truss, the work was done without injury. We took the plywood and trusses to the location and unloaded them all. 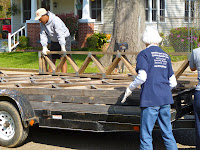 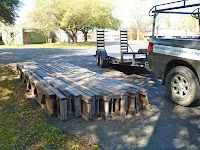 Once the materials had been delivered we returned to the main site for po' boy lunches. Here's what Wikipedia says:
A po' boy (also po-boy, po boy, or poor boy) is a traditional submarine sandwich from Louisiana. It almost always consists of meat, usually roast, or seafood, usually fried, served on baguette-like Louisiana French bread.

A key ingredient that differentiates po' boys from other submarine sandwiches is the bread. Typically, the French bread comes in two-foot-long "sticks". Standard sandwich sizes might be a half po' boy, about six inches long (called a "Shorty") and a full po' boy, at about a foot long. The traditional versions are served hot and include fried shrimp and oysters. Soft shell crab, catfish, crawfish, Louisiana hot sausage, roast beef and gravy, and French fries are other common variations.

A "dressed" po' boy has lettuce, tomato and mayonnaise; pickles and onion are optional. Non-seafood po' boys will also usually have mustard; the customer is expected to specify "hot" or "regular"—the former being a coarse-grained Creole mustard and the latter being American yellow mustard.

Mine was loaded with fried shrimp. Good thing I don't always eat like this!
After lunch we returned to the church parking lot. We lined up eight upright trusses two feet apart. A second layer of upright trusses was placed on top, perpendicular to the first, and anchored via "toenails" (nails angled inward). Plywood sheets were then laid on top of the two layers of trusses, then hammered and screwed into the trusses. I learned how to use a screw gun correctly for this project. 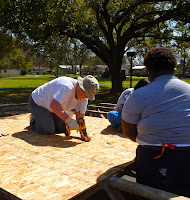 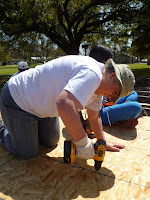 We had two and a half feet of plywood hanging over the end of the trusses, so I learned to use a circular saw to cut off the excess. Our foreperson, Lauren, was a patient teacher. 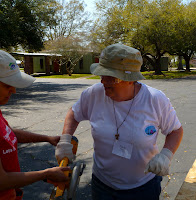 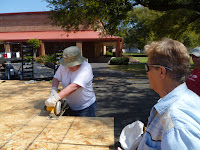 Four young women, students at the University of Louisiana at Lafayette and working with AmeriCorps for their work study, arrived to help. We were interested in their stories, and they were curious about why we were there. 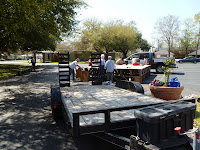 Once we had created the work table, we loaded all the scraps and tools into the truck and returned to the Habitat site. 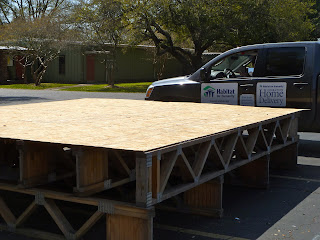 After an hour-long break at the motel, the group met again for a 90-minute dance lesson on Cajun waltz and two step. It's been a while since Art and I danced together, and I'd forgotten what fun it is. I understand we're going to dance halls tomorrow and Friday night where we'll have a chance to practice for real. We also learned how to play a washboard with spoons!
For dinner at a nearby restaurant, I ordered boiled crawfish. Three pounds of the freshwater creatures arrived in a box about 12" by 12" by 6". They look like miniature lobsters and have a similar taste - about one small bite of meat per crawfish. I ate about half of mine and donated the rest to our coordinator's take-home box.
We found out that Ellen will have a "cementing" procedure done tomorrow morning and will probably be released from the hospital tomorrow afternoon. She hopes to be at the work site on Friday as an observer.
Lots of work and learning today under a sunny sky. I'm surprisingly not stiff and sore. I guess pacing myself has worked! Or maybe the combination of exercise classes, training at the gym and yoga has conditioned me enough.
Posted by Linda Myers at 7:06 PM

How totally cool! It sounds like quite a lot of fun, not to mention a fair amount of work. Thanks for including pictures, Linda, it helps to see them. Now I want to taste a po boy!

Oh my gosh, what fun! I love the idea of dancing again. Haven't for quite a while. Every job should be balanced with this kind of fun.

What an amazing day!
I had shrimp po boys when I was in New Orleans. Yum! I did think the french fries with gravy po boy could easily be passed up.

I think there's a special place in heaven for Habitat builders.

What an amazing and well balanced day with work, learning, meeting neat people, eating different food(I'd have to pass on the crawfish) plus adding recreation.
I love that there were young people also involved.
Wonder if they could use a 71 year old?

Sounds like you're doing good work and you can't beat Louisiana food. Good luck for the rest of the week.

What a great combination of work, food and play. Enjoy while you're contributing- the well balanced life!

This is very interesting. You are having so many new and exciting adventures. I love that you build in the day and dance at night. There is probably a lesson for us all in that.