Our crew of five women built three more work tables today. We were familiar with the process so the work went faster. But the weather was warmer - it got to about 82 - and we spent more time in the sun, so it seemed like harder work. Still, we all collaborated so we were more efficient. Meanwhile, the men installed about half the roof on the site house.
I asked how people get Habitat houses. Lauren said the people have to be working and they have to be in a living situation that they need to get out of - like numerous people living in one small place, or a slum landlord. They put in several hundred hours of sweat equity and then get a zero-interest mortgage which is often about the same amount as the rent they were paying. 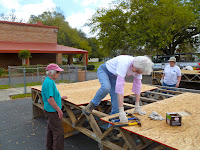 Back at the motel, we had a guest storyteller and fiddler. He told us how the Cajuns of Louisiana got here - beginning with 1601 when a group of sharecroppers in France were promised land in Nova Scotia if they'd leave France and settle there. Once settled, they lived in Nova Scotia for about 150 years until political pressure from the British forced them out. It's a long story! Between sections of his narrative, the storyteller played the fiddle for us, demonstrating how the music of 400 years ago gradually changed into the styles of today. 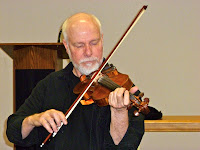 We had dinner at a dance hall and Art and I got to try out the Cajun waltz we learned last night. Fun!
I am surprised at my stamina. I take an exercise class three days a week, and I go to the gym a couple of times a week to work on balance with the bosu ball, and I take yoga one night a week. For some reason I didn't get that all those things would make this project easier. Sometimes I'm a slow learner.
Posted by Linda Myers at 8:17 PM

I'm very impressed with all you are doing and all you are learning, and that all that exercise back at home is paying off for you. Well done!

What a great experience. It's wonderful that you are getting to experience the culture along with the work you are doing.

You can no longer call yourself a bag lady in waiting. You're so much more!

I am just so impressed with all you are doing and experiencing. What a marvelous program and I am so glad you are proving fit. Your satisfaction levels must be thru the roof.

Watch that heat, it can be rough.We often took salt pills to avoid the results of not being used to sun.They are lifesavers to have around.

I am enjoying this adventure so much! And the pictures help a great deal, as well as your most excellent narrative. Glad to hear you are doing better than you thought you would.

What a great experience. I am humbled by your ability and willingness.

Each new day is certainly bringing much adventure for you.