My husband Art retired last May. He had worked for the electric company for over 40 years and his last job was line crew foreman - a thinking and supervising position, but also a lot of active physical labor. Art was accustomed to working hard. He had a couple of rotator cuff surgeries and then, last January, a surgery to remove the painful arthritic joint in his left thumb and replace it with a tendon from his forearm. He had no more pain, but his grip strength was diminished - so even if he hadn't retired, he wouldn't have been able to do his job any more. At present he collects long term disability (for another 15 months) as well as a pension.
Since retiring, Art has worked a Sudoku and the crossword puzzle every morning. He's worked in the yard in good weather. He's read. He's been on ten trips with me. But except for one day last month when he climbed a tree to saw off some dead branches, Art's level of physical activity has been pretty low. It just hasn't come up in his life. And since his appetite has always been excellent, he's put on some weight, which isn't real great for arthritis in other joints.
When I suggested we do a Habitat build in Louisiana, he was amenable. "It's on your bucket list after all," he said. He packed his work boots and his work jeans and his oldest t-shirts. And in Louisiana, he worked hard physical labor for four days. He was on the roof, sawing and hammering. He was lifting sheets of plywood and anchoring them. The construction foreman would say to him, "Do you know how to do this?" Sometimes Art would say no and the foreman would show him how and he would do it. He learned a lot up there on the roof, and apparently he did his usual hard work, because more than one person told me, "He's an animal up there." Here are a couple of pictures of Art I posted previously from last week. 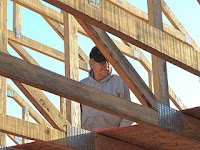 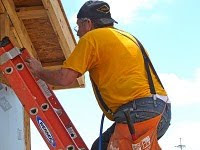 On the plane coming home, I asked Art if he'd be interested in working for Habitat at a local affiliate in our area (Seattle). He said yes. So yesterday I went online and learned the East King County affiliate is working on a group of houses in two locations. They have full volunteer crews on Saturdays, but they need people on Wednesdays and Thursdays. Since we're not working, we can do that together. We'll be signing up to work once a week when we're in town. Our first day is Thursday, April 7.
Today is Art's 68th birthday. We went to exercise class this morning. He wore a t-shirt that says "How the hell did I get this old?" Everyone wished him a happy birthday. I suspect one of the great gifts, though, is his knowledge that he can still build, still be useful, and that there are projects out there that need him. He may be retired from paid work, but not from the opportunity to work more and be of service.
What's also cool is that yesterday we got a letter from Elderhostel telling us that our entire trip expenses are tax deductible - half of the fee is a donation to Elderhostel for administration and the other half is unreimbursed expenses for a volunteer activity. Even our airfare and car rental can be deducted. I had no idea. Guess it will make future out-of-town builds more feasible!
Posted by Linda Myers at 11:08 AM

Happy Birthday to Art! The retirement life you're building for yourselves is so amazing and inspirational. I feel honored to be able to read your stories.

Welcome, Art, to Sixty-Eight. I've been testing the waters since December and finding them just fine! And your Habitat build has shown both of you that life is far from over after retiring. Yayy! Very uplifting post, Linda!

What a great opportunity for Art and you to stay busy and purposeful. Happy 68th to a great man!

What an interesting story. I commend both of you.

Congratulations on staying young. And a big Happy Birthday to Art!!

Sounds like the Habitat trip was great for you ... and even better for your husband. Good going!

Happy Year to Art and right on! to you both for continuing to contribute.

What a great retirement you and Art are living! To be of service and to try new things...doesn't get any better than that! Congratulations!

It's wonderful that he was willing to go with you, and now you have a whole new passion together. Fabulous. And Happy B'day to Art.

Hey Linda, good to see you had so much fun on the build. I sure am sorry I missed most of it! I am thinking of getting more involved at the local level too...we have several houses going up right here in Fayetteville.
I am remarkably better since Saturday...of course I have slept most of the time and that allows healing.
I didn't get my letter yet, but I hope they don't hold it against me that I only worked a couple of hours! ;-)
My car has arrived and things are getting back to normal. I am still amazed that I am basically OK!

And happy birthday to Art.

You really do "get back" when you give! Nice.

What a great story. You guys are an inspiration to all of us soon-to-be and current retirees.

Good news all around! I think it's wonderful that both of you will participate in more Habitat building. You're getting a lot out of giving.

Ahh that's not old Art.Nice to stay at it.You can look at those cabins online or call for dates you were interested in them.

What a neat experience for the both of you. I've looked into volunteering with Habitat before...unfortunately at the time, I was working and was unable to get involved. However, with my new found "freedom" *laugh* I've got several volunteer projects in mind.

Keeping active is the best way to stay young. Getting on a roof and doing all that work? Art's not old!! But I do love the shirt quote :D

What a wonderful experience. I have had several acquaintances who have gone. This post is a nudge in that direction.

It is so encouraging to see how active, productive and happy you both are in retirement. We are turning 60 this year, and we're looking forward to that phase in our lives.

Well Happy Birthday Art. How wonderful that even though he has health issues you both are still going strong.
Have a lovely weekend.

Happy birthday to Art! Its been fun catching up on your building adventures. What a wonderfully generous way to donate your time to those who really need the help! Happy to hear you'll be pursuing it in your area too :-)