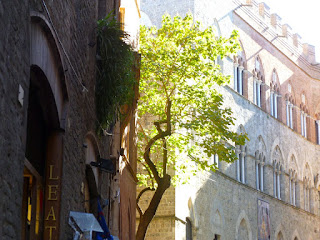 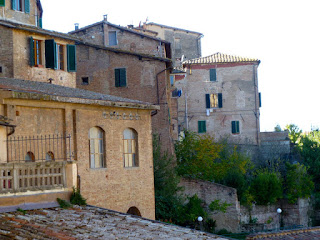 I am learning a lot about art in spite of myself. I found out that frescoes (essentially watercolors done on wet plaster) get dirty from burning candles in churches over centuries, so eventually they fade but can be restored. At the cathedral in Siena there was a room full of frescoes that was closed off for hundreds of years because it was never used. Eight years ago the room was opened up to the public, and the frescoes are as fresh as they were at the time they were painted. Here's a shot of part of the ceiling. 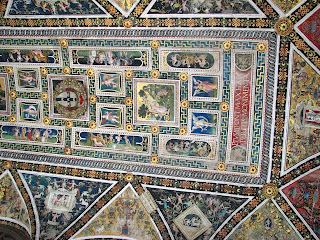 I've also learned about how two-dimensional art gradually yielded to three dimensions in painting and sculpture, but it took a while. This 13th century pulpet in Siena was revolutionary for its time. Part of the purpose of the art in churches was to teach the people, who were illiterate, the message of Christianity. 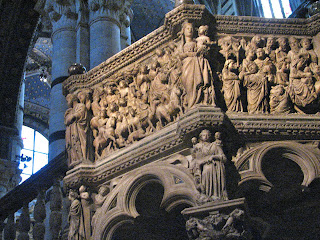 I have a new camera and haven't figured out how to turn off the flash, which isn't allowed inside the museums and churches, so these shots were taken by my husband Art. I've included them here as proof that we are, indeed, visiting the great churches and museums of Italy.
Siena was a big city in the Middle Ages, as big as Florence. Siena was located on the primary road to Rome but not on a river or coast. It was a banking city with a population of 60,000. After the Black Death ravaged a third of the population, Siena slept for several centuries. Today it is thriving - again with a population of 60,000.
Tonight, back in Florence, Art and I successfully navigated the city streets and found a restaurant recommended by a friend in Seattle. We've learned enough about the Italian language and menus to be able to order exactly the meal we wanted: a shared caprese (slices of tomato and cheese), individual bowls of Tuscan vegetable soup (base is black cabbage), and a shared chicken dish with lemon. Sounds like a small accomplishment, probably, but we've come a long way since our first meal in Italy ten days ago. We feel almost comfortable here now.
Posted by Linda Myers at 12:58 PM

It sounds so fun, Linda. I can imagine how nice it must be, to feel a bit more at home. What wonderful things you're seeing (sounds like Dr. Seuss)!

I would have loved help with dining in Paris. It's good that you have many meals together to learn, and then some on your own just to get away, and practice what you learned.

Thanks for stopping by Buttercup's. Enjoyed reading about your visit to Siena -- one of my favorite places. Be back again to visit often.

Siena looks so beautiful and that meal sounds absolutely delicious. I'm so glad you're having a good time and it's a good time to be away...these elections are driving me nutty!

It sounds like you really enjoyed your trip. Are you going to come up an see us again this summer? Virgil