Getting comfortable with Florence

We had a couple of destinations today: the Galileo Science Museum, to the side of the Uffizi Gallery near the River Arno, and the Accademia, on the other side of Old Florence.
Art has been patient during our multiple museum/church tours during the last couple of weeks. So it was my turn during our time in the science museum. I listened to a Rick Steves podcast while Art read about the various instruments and gadgets from previous centuries.
This afternoon we arrived at the Accademia at 4 p.m., by which time our tour guide said there would be no line. Wrong. Art in his white jacket marks our spot after half an hour. 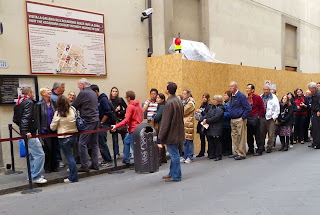 We did get in, though. After buying our ticket, we rounded the corner of the first room and there he was. Michelangelo's David. I'd seen pictures, but they didn't do justice to the real thing. I must have stared at the sculpture for 20 minutes. I'd never known David had a slingshot strapped across his back. Or that his hands and head were oversized because he was supposed to be on top of the Duomo, 200 feet or so above the ground, where his proportions would have seemed more natural. Or that for nearly 300 years he stood outside. Or that, from the side, his eyes are full of fear as he looks at Goliath.
The really cool part was that I'd given Art my iPod to listen to the podcast about the Accademia, which he did while we were standing in line. Then, when we went inside, he explained the place to me.
There are four incomplete statues in the space leading to David. They've been called The Prisoners because they look like humans trying to emerge from rock. That happened because Michelangelo didn't finish them. But it looks intentional. The man was a genius. I've already ordered "The Agony and the Ecstasy" to reread when I get home.
Posted by Linda Myers at 1:40 PM

Wow! I would LOVE to see David in the flesh, so to speak. And the Prisoners. Yes, he was a genius. Thanks for the update on your amazing trip.

Michelangelo is such a strong presence in Florence, and I recall that the book brought him to life (though I can't recall anything from the book these many years later). Sounds like the recording was really useful, too.

And that is why we travel to the cities, of course, to see the real thing, the masterworks.