For some reason I never knew St. Francis of Assisi was the son of a wealthy man and, in his youth, was a "bad boy". At a certain point he narrowed his goal: "to walk in the footsteps of Jesus".
Today we visited the basilica built two years after his death to honor him. One of the finest tour guides I've ever experienced - knowledge of Francis' life and of art. All delivered in a low voice into my ear via headphone. I converted to Catholicism as a young woman and left the church 20 years later after a divorce. Today I was reminded again of the simplicity of the original message of Jesus. 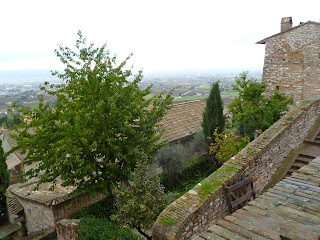 Assisi is a hill town, built on rock. The hills are mostly steep and, it seems, mostly up. We walked four miles today on a self-guided walking tour suggested by our Rick Steves guide to Italy. 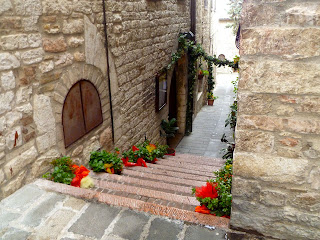 We stopped for lunch at a small restaurant two alleyways away from the central square. The proprietor noticed my Rick Steves book, brought me eight business cards in a torrent of Italian I didn't understand. Except I did. She wanted me to get one of those cards to Rick Steves. If a business gets visited by him or someone in his organization, and gets included in a subsequent edition of the guidebook, the business will thrive. I told her I would take the card to him. And I will. His office is two towns over from where we live.
Tomorrow we leave for Florence and a laundromat!
Posted by Linda Myers at 12:44 PM

I love that picture of the stairway and ivy. What a wonderful place! And I can understand why someone would want to get into Rick Steves books; as you said, everyone will check the place out.

Lovely photos. Every day that I visit your blog, I get a little more desire to revisit Italy. As a grownup!

We saw a lot of Rick Steves' books on our travels in Europe, and used his recommendations for lodgings in some areas.
I noted your comment about the simplicity of the original message of Jesus. It certainly has been twisted and contorted.

Beautiful photos, Linda! That second shot looks like a painting! I'm trying to catch up on blog reading. I've missed a lot of posts, much to my chagrin.