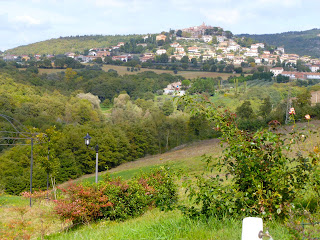 Traveling through Umbria today, we saw miles and miles of countryside that photos can't do justice to. I wanted to doze but didn't want to miss a single glorious scene out the window.
Our first stop was at a 12th century monastery converted to an Alice in Wonderland type place by an eccentric architect, owned for the last 22 years by a couple of men who reconstructed it, who now live there and give tours of the place. The architect had talent, but the outpouring of his creativity went into a place he never expected the public to see. It was a tribute to vanity and oddly disturbing to me.
Lunch was at an agritourismo place. The Italian government, seeking to save farms from being abandoned and falling into ruin, offered 150,000 euros to people who would move to the countryside, fix up the farms and develop some kind of business that would create jobs and contribute to tourism. This place was an idyllic restaurant. We had our usual multi-course meal: antipasto, first course pasta, second course meat dish, and dessert. This week I've learned to eat only what I really want of each course so I have room for the next. Even then, limiting my intake is a challenge.
We arrived at Assisi around 5. This is the place where St. Francis was born and is buried. Born to a wealthy family, he renounced the material and lived to serve the poor. Now, the entrance to the city is lined with tour buses and souvenir stands. The steep streets invite visitors to drink and dine and buy. I remarked to a fellow traveler that many have benefitted materially from Francis' presence in this place in the 12th century.
Our hotel is on a steep hill, midway up a flight of stairs. In all our travels, we've had only one hotel room smaller than this - in Dublin in 1999. We were also disappointed to learn the town's laundromat is closed until Monday, so we're washing the necessities in the bathroom sink. Add to that inconvenience the fact that I initiated conversations at dinner on both politics and religion with a couple of conservative fellow travelers. I should know better.
Posted by Linda Myers at 1:39 PM

The nice thing about retirement is that even when you "know better," the only person you have to please is yourself. If you can't speak up now, when would you? You go girl! I, for one, am tired of being bullied by the likes of Glen Beck, Bill O'Riley and those self-serving men of the cloth of any religion.

I love the irony of the tourist trade in St Francis' home town.
We discovered almost at the point of being out of the "necessities" that we would have to do hand laundry in European hotels and on river boat cruises, unless we wanted tp pay $3 to launder a pair of undies!
I am probably in hot water with members of my own family, but like Nana daid, if not now, when? I say speak your mind. You never know when you might actually be enlightening someone who never heard a diverse point of view before.

Thank you, Jann and Linda. Nice to have a couple of like-thinking buddies in my daypack.

It seems the "Right" never questions their "right" to speak, and vociferously, so neither should we. I agree, speak your truth. Give them food for thought. Hope you're having a great time!

Enjoy! What beautiful countryside. The nice thing about conversation is that you can always change the subject.