We've been home 24 hours and already our busy life has resumed. I want to record some final thoughts before we put this vacation behind us. 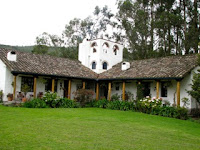 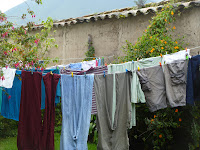 Our Last Laundry
We spent our final day in Quito. We met up with Lynne and Sean, our home exchange partners, at their very nice apartment in the city. We went to the old city with Lynne, enjoyed a late afternoon snack and then a dinner before calling a taxi for the airport. Though the variety and pace of things in Quito were interesting, Art and I reaffirmed our opinion that we really prefer smaller towns and rural areas when we're traveling.
The physical beauty of the area where we stayed is comparable to any other lovely places we've seen: Hawaii, Iceland, New England, our own Pacific Northwest. The green seems greener, though, in Ecuador. And perhaps because the number of tourists we saw was smaller, Imbabura province seemed more rare and special. We could have taken a picture of the volcano every morning from our back yard, and each photo would have been different - different cloud formation, different light.
It seemed to me like the area should be filled with tourists. I suppose that's not the case because "Ecuador" doesn't rise to the top of places people want to visit. But for those of us who go there, the memories rise right up.
I've long been in favor of the education of women as the best way for a region to improve its lot. But I always thought of "education" as high school and college. Not as elementary school. I realize that a person can be smart and practical, but if they have no education - or a poor one - their knowledge of the world can be extraordinarily limited. I met a woman, for instance, who thought the Ecuadorian volcanoes were caused by the use of too many plastic bags. I make assumptions about what's common knowledge. And I think we should teach everyone. But then I wonder. Does it matter? If a person is able to get by, how much do they need to know? How much should they know?
Poverty is sometimes measured by annual income. If a family is living on $5,000 a year, but they have a plot of land on which they grow their own food, and they have a cow and a pig and some chickens, and they live with family members, are they poor? Where I live, if money disappeared one day, we'd be in a world of hurt. We grow only a small part of our own food, and we rely upon a sophisticated infrastructure for our heat and electricity - which we think of as necessities - and we live in small nuclear families. But in Ecuador and elsewhere, money is used for only some of their needs. They are more self reliant. And they are accustomed to less. We had fires in two fireplaces in our casa because comfort for us was a temperature of at least 62 degrees. But that's our cultural preference. If we wore layers those fires wouldn't be necessary. Even so, though, we had to maintain the fires in the evening. That required us to be more mindful than setting the thermostat on our central gas heating at home.
We ate fresh local fruits and vegetables in Ecuador. Yesterday Art went to our local supermarket and brought home three peppers. Each was a different color and was bright and shiny. I knew those peppers had been grown somewhere very far from Brier, Washington and shipped hundreds or thousands of miles to reach us. Somehow they didn't seem as real as the ones we picked up last week at the mercado in San Pablo. And the pot roast I had for dinner tonight grew in a styrofoam package, not on a recently butchered cow.
I think Ecuador has about 14 million people - very small compared to the U.S. We can get just about anything we want here. But I think about the difference between what we want and what we need, and I wonder.
We're so glad we spent three weeks in Ecuador. We learned a lot more than Spanish.
If you're interested in spending some time where we did, you can rent the casa at www.casaquinde.com.
Posted by Linda Myers at 7:59 PM

I am so glad you were able to get to an internet cafe and share your experience with me. I am now much more interested in traveling to a place like that than I was before. You also made it seem magical in a very down to earth way.

And you're right about our reliance and interdependence for just about everything. Sometimes I worry about what would happen if we lost electricity (just one thing) for a while.

Not only was your trip interesting reading but it was a fine piece of writing! Thank you for sharing your travel adventures. As someone who's financially homebound, it's a great escape!

I could adjust to that simple life easily. I laughed walking out the other day and the air smelled like it did when I was in the Cananry Islands, a sweet memory as in your journey.

What a fascinating trip and perspective, Linda! You ask some very thought-provoking questions.

One of the wonderful things about travel to other countries is the broadening of one's point of view that it provides. It is a wonderful extension of that education you referred to.
In sharing your trip with us, we learned too.

I am so sorry your trip is over for I really enjoyed being taken along. Thank you for that.
You are so right about wants and needs. We are flush with wants but I don't think we are any happier for it.
You do such a great job with your travelogues.

Great travelogue, Linda. I enjoyed traveling with you! My friend Mary has spent time in Ecuador and loved the countryside. We Americans expect all our basic needs to be fulfilled by handing over cash. The third world is a different story of self-sufficiency.

Welcome home! It sounds like your trip was life-changing in all the ways we hope travel will be. Ecuador is now on my list of places I need to see because of your experience and amazing writing.

I just got back from a trip myself (to, among other places, a town you know -- Sedona, AZ)and so a hearty "welcome home" to you. It sounds like you had a fantastic traveling experience, re-energizing body, mind and spirit. Thanks for bringing us along on your journey.

I'm so glad you got home safely...take time to decompress and bask in those lovely memories!

It is rare for someone to make a trip like you and hubby did and not come home with a different perspective. Our way of life isn't wrong and Ecuador's right. But, in being able to look at both from the inside out, you can spot areas that contain teachable moments.

The typical American's lifestyle is completely dependent on a huge infrastructure. It also must have other people in the world agreeing to supply us with what we want when we want it.

As you noted, something as everyday to us as heat on demand is not the norm in other places. Being aware that a thermostat isn't a core necessity of life gives you a fresh look at what is really important.

Thanks for sharing, Linda.

You show the expansion of mind that comes with travel and paying attention. There are so many ways to live a full life. Thanks for sharing your perspective.

I'm so glad you got to go but am also glad your home safe and sound.

Yes, I'm sure your travels make you aware of how very blessed we are here in America.

I loved followin' this adventure sweetie.

God bless and have a magnificent day!!! :o)

Welcome home! I appreciate your stories in 'real-time' while traveling in Ecuador. Planning on reading your book sometime soon.

I have so enjoyed reading about your adventures. You're a talented writer and a sensitive soul.

I too have thought about what we would do if our country's massive support systems failed. And I have also noted how people in less fortunate countries often seem so happy and content with so little. I think we have some lessons to learn from them.

Oh you're just so much more adventurous than we are, or hope to be. One trip or two a year is all we can manage, plus visits to hospitals and doctors out of town. I'll travel vicariously through your trips. Thanks for sharing.