Outing to Ibarra and San Antonio

Ibarra is a larger city about 40 minutes north of San Pablo. Virginia's taxi driver, Carlos, picked the three of us up at 9:30 a.m. Virginia had a dental appointment so Art and I were encouraged to visit the Parque de Calderon and the city museum. As we disembarked Virginia said, "Just go straight and you will find the park. The museum is one street over." We went straight, and straight some more, until we hit a T intersection in a noncommercial neighborhood. We asked directions from three different people and ended up at the Parque de Calderon. I should say it was about 15 degrees warmer in Ibarra, and sunny. By the time we arrived at the Parqe de Calderon I was overheated and hypoglycemic. I grabbed a handful of almonds and shared an an apple with Art. We visited the museum -- lots of pre-Columbian stuff (with English translations included!) and an exhibit about the labor strikes of 1910-- with an eager, non-English-speaking guide accompanying us. Once back at the park, we watched groups of dancers inwhat looked like a competition as we baked in the heat radiating upward from the concrete plaza. I should say I baked; Art does just fine in heat. 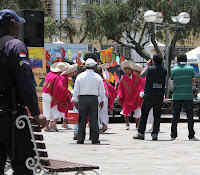 Virginia finally joined us and told us we were in the wrong place. And we were. We had gone to exactly the place she had told us, but the right place had a different name!
After a leisurely lunch in a cafe where the proprietors streamed an American country-western station on the Internet, we hailed a taxi and went to the Ibarra mall. Found the SuperMaxi grocery store and stocked up on the meat we'll need between now (Thursday) and next Tuesday, when we leave for Quito. Also found a large box of tissue, which I'd been unable to find anywhere else, and replenished the laundry detergent, dishwashing soap, butter and salad dressing we've used.
On the way home we stopped in San Antonio, known for its woodcarvers. We watched a man using a chain saw on a tree trunk to sculpt a statue of the monseignor of San Antonio, who had died recently. 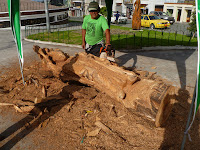 I found a simple three-piece indigenous nativity set for $8. It will be a great reminder of our trip.
We were approached by a student from the university, who is studying tourism and had an assignment to interview a tourist. She had to speak English, and so did I. Art took our picture and I told one of the student's friends I'd be posting it to my blog. I provided my email address and said if they would send me an email I would direct them to my blog. One of the students wants to continue to correspond. I've done that before, with young people in West Virginia, Turkey, and Viet Nam. 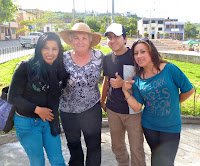 We got back to San Pablo at 6:00 p.m. Venancia was preparing our dinner and making fresh fruit juice. All the laundry had been brought in. It was good to be home!
Posted by Linda Myers at 4:52 PM

What fun making friends with students in other countries and corresponding with them!
(On "The Fifty Factor" today Joanna was complaining about how Blogspot is messing with her fonts and points
when she blogs lately. It looks like you're having the same problem.)

I am enjoying your trip so much I find it hard to believe its almost over already! I can only imagine how fast the time must feel like its passed for you & Art. So much breathtaking scenery, friendly people, wonderful artwork...I may need to take a trip down there sometime!

What fun, to make a friend who continues to correspond with you.

You're having quite a vacation! It all sounds wonderful.
jj

I don't do well in the heat, either. I can imagine what you felt like. But to come home and have dinner made, the clothes brought in, what a treat! :-)

A very ful day. I was in WA and everyone was melting when it wasn't really warm,78, we get a lot of that here.

You had a very full day. I would probably not travel well with you, or maybe we would be good together. I get the same way if I am overheated, and I overheat easily. It is a good idea to carry almonds. That is what I do. Or, a quick trip into a market for some cheese when I am hypoglycemic seems to help.