My path to wi-fi: 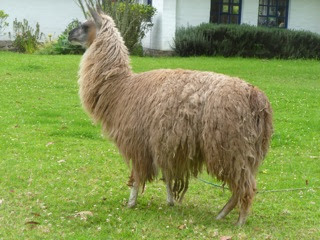 Past the llama grazing in the common area 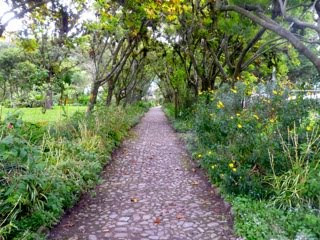 Down the path to Hacienda Cusin 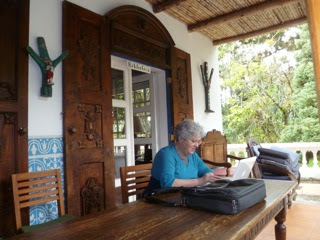 When I met Art he had no interest in traveling. He said, "I was in California and Viet Nam when I was in the service. That was enough." I'd been raised in the military and had gone through the military experience with my first husband, so it was not quite a habit. The first trip Art and I took together was to Central Washington, for a Kenny G concert at the Gorge and an overnight at the Best Western Ellensburg, with his best friend. The next year we rented a motorhome and spent a week at Derry's Resort near Leavenworth, Washington, with six kids of ours or someone else's. The next year we went to Whistler, then to Bryce/Zion/Grand Canyon. Then Ireland. Now, 15 years later, we do a lot of traveling, and Art lists it among his hobbies.
I'm a planner. I like to know where we'll be staying and when, how we'll be getting around. I like to know where the ATMs are along the way. On our three-week road trip last spring, I had our route planned each day, and we followed that schedule just about exactly except for once, when we decided to stay one day longer in Iowa.
Art's not a planner on the road. But he has an independent spirit.
Here's my idea. Hire Jorge, the driver who brought us from Quito. Have him take us there and wait while we do our shopping, then bring us back. His services would cost about $30. Here's my next idea. Take a bus to Otavalo - we catch it in San Pablo and it costs 25 cents each way. But take Venancia with us so she can show us where the store is, where the bookshop is, where the market is. Here's Art's idea. Take the bus to Otavalo and figure it out as we go.
I said, well, okay. If you want to do that, then you be the leader and I will be the follower. Art rolled his eyes and refused to agree to my proposition.
So we have a style difference here. I'm not an exploring kind of traveler; Art is. I want to minimize risk and maximize safety; Art isn't as concerned about that as I am. Seems odd, seeing as how I've done so much more traveling in my life than he has.
Today we took the local bus to Otavalo, a larger town about 15 miles from San Pablo. After disembarking at the regional terminal, we asked twice for instructions to Aki, a market, where we picked up groceries we can't get at the tiendas in San Pablo. The market reminded us of the one we visited last spring in Gordon, Nebraska, which provides the primary shopping for a town of 1500 people. We'll be returning tomorrow to visit the fruit and vegetable market.
When we got off the bus in San Pable, we had to fight our way past a scramble of boys just out of school. 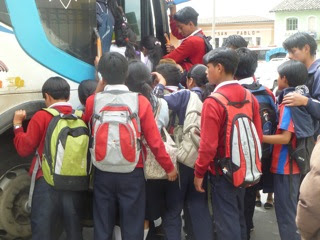 I'm more like Art. Jim is the planner, but he doesn't plan as in detail as you do. I hate to have a strict plan to follow when I travel. There are times when I wish I would have done a bit more planning before I traveled though.

I am a bit more cautious than Art. I don't get lost!

I hate planning for trips, but I don't like too many loose ends either. So, we talk to travel agents, and they do the work for us.

It makes me nervous just reading about how you plan your trips. I guess I'm not cut out for freelance travel. I need tour buses and planners to make me comfortable.

Like you, I am a detailed trip planner. And so far it has served us very well. Most importantly, I want to know where I am sleeping each night, and I know we see more when we plan.

I'm a planner. I'm traveling solo now in my RV. I have things written out on index cards to make it easier to refer to the information while I am at rest stops. Your travels sound interesting but I'm not sure I am ready to travel out of the country yet.

I'm a semi-planner. Like to know where I'm going to sleep, but otherwise I follow my nose.

But then, I'm only semi-adventuresome as well. The farthest I've gotten is Ariz., and Calif., where I am now. Don't think I will make it as far as Ecuador.

Your way is much safer, but I am like Art also. Often I live to regret it but the adventures make it memorable.
I might be more like you however with a language barrier.

My guy is the planner, and I am the free spirit. We work well together, as I think you and Art do. Love the llama picture. What a great place you are in, I am enjoying it so much.

Thanks for sharing your grand adventure with us as it happens. Wishing you a good time and great trip. Definitely looks to be off the beaten path!

I forgot to advise on hiring a driver for the entire stay.