Our dining room, our kitchen window, and Venancia. 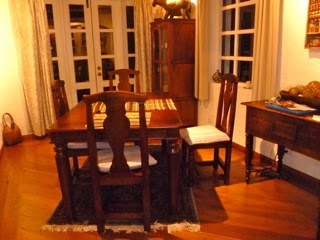 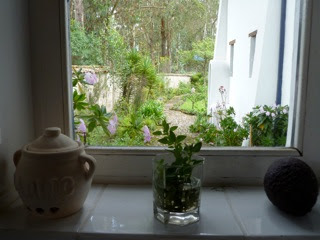 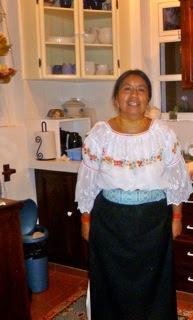 When the weather is iffy we try to take advantage of the sun. Today is laundry day so I was up fairly early to get the clothes washed and hung out. Within an hour the clouds came in. I checked the line several times, bringing in whatever was dry each time. By lunchtime most everything was dry enough to bring in, except for the jeans.

We'd planned on an outing to Cotacachi, a village about 40 minutes from here, where the craft specialty is leather. I'm hoping to find a laptop case. But we decided to wait until Monday instead and get an early start. Cotacachi is also where numerous American ex-pats have purchased property; we hear the prices are higher than elsewhere. Apparently the houses look very good but, since there's building code in Ecuador, they're not as sturdy as they'd be built in the States. And Ecuador is earthquake country.

Instead, we went into San Pablo to check out the mercado, or fruit and vegetable market. We picked up a large cauliflower and four large beets, for which we paid a total of $1.25. We went to the largest tienda in town looking for a box of Kleenex. I gestured blowing my nose and the proprietor held up a purse-sized packet. I said, "Mas grande, por favor." She rummaged in the back and found a half-size box. I nodded and said, "Dos, por favor." She shook her head. She only had the one box. And there was no price on it. She made two phone calls to find out how much we should pay. It was $2.50! So tissue is an Aki-in-Otovalo item next time.
We noticed plants growing on the electrical wires, as well as on nearby rooftops. 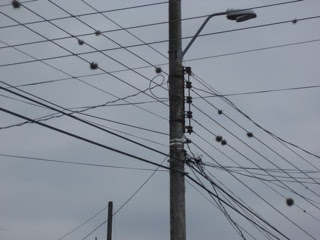 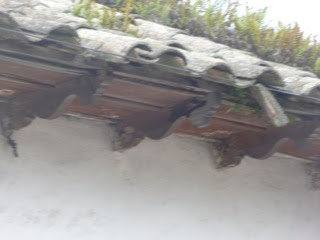 For an afternoon activity we decided on a two-mile walk into a rural valley, but we barely got off the grounds of Cusin before we ran into Virginia. Instead of the walk, we spent time meeting the animals in the stables. Only one horse was there, but we met a mother chicken and her babies, a goose and a duck - raised by the goose, that thought it was a goose - five guinea pigs who will be eaten for dinner soon, and a lonesome silky rooster. Apparently a dog got into the stables last night and killed the rooster's wife and a turkey. There's an animal market in Otovalo early on Saturday morning, so the three of us are going in to buy a new wife for the rooster! 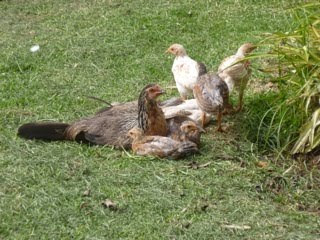 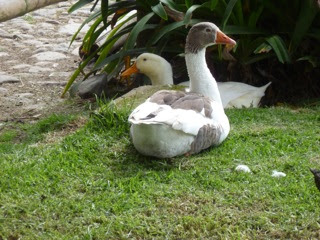 A fascinating glimpse into a slice of life from your location. I don't know much about Ecuador except its location. Is in a safe country? Is the government stable? Obviously you are not living like the typical resident but you probably can sense if they are happy and content.

Bob asks some good questions.
I love it that you are buying a hen.

I am loving learning all about your trip.

I'm really enjoying this series of posts, Linda, both photos and the interesting information you give.

It seems like such a wonderful vacation in this part of the world, Linda. I am enjoying your pictures and the serenity of the environment.

Your daily tours are such a refreshing departure from the drab days of the north!

No need to have to do anything on schedule while on vacation,very nice