We found a taxi to take us to the condor park today. It's located, amidst panoramic views, at 9184 feet on top of a hill about seven miles from Hacienda Cusin. The park displays rescued birds of prey, owls, and several magnificent condors, and highlights their importance in the ecosystem.

The taxi driver spoke rapid, enthusiastic, incomprehensible Spanish. Something about no taxis could go to the park, so we would take his truck instead. He backed the taxi to the curb half a block away and escorted us to a pickup truck. I had a momentary flash of uneasiness as I watched us leave the grid, possibly be kidnapped and never heard from again. Just momentary, though, as I climbed into the back seat. The driver, Juan, took the back roads to the park, passing through villages we hadn't seen yet, then climbing hills on rutted or cobblestone roads. Narrow roads. With drop-offs. Talking on his cellphone. However, we did get to our destination. I realized that taxis would have a hard time with going in the back way. Juan told us he would wait for us and there would be no extra charge. He said most people aren't in the park for more than 45 minutes.

The condor park is a labor of love. Simple, with good habitats for the rescued birds, clean. An English-speaking proprietor - I'm thinking South African from his accent - introduced us to the place, and then we walked through a small museum and then the various habitats. At 11:30 a.m. the proprietor held a demonstration with about eight birds, including one eagle in a free-flight demonstration. The bird disappeared for 15 minutes and then returned to the man's gloved hand. I could tell the man loved the birds. And they all returned to him. My only regret is that all the signs and explanations were only in Spanish. 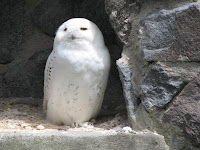 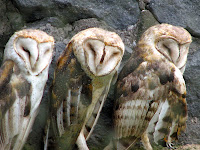 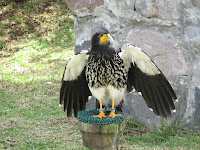 Juan was snoozing in his pickup when we got back to the parking lot. Our drive home was partly on the Pan American Highway since he needed to stop for gas. There's a festival going on in Otavalo this weekend, so the traffic was heavy and the traffic light was out. I suspect that's why we went the back roads on the way to the park. We paid Juan $8 for the ride to the park, and $10 for the ride home because of the length of time he'd waited for us while we walked the park and viewed the demonstration.

Wonderful pictures! Is that a snowy owl? Sure looks like one. You reminded me of the time we bought a ride to the Great Wall from Beijing. It cost $40 and we drove a long ways and were dropped off. When we returned three hours later, all the car drivers were playing cards and biding their time before our return. We had also paid for their time to hang out while visiting the Great Wall. It was well worth it. Sounds like you could say the same thing, and cheap, too! :-)

I can imagine the awful feeling when you suspected you were being kidnapped! It sounds like you have adapted to the altitude very well. Are you ready to come home yet?

Amazing place to visit.I like how cheap your ride was also!

Another day and another great adventure!

Linda, this has been a fantastic holiday and I've so enjoyed your posts about it. I don't think I want you to go home on Tuesday. :-)

The trip was truly worth it but I doubt I would have had the courage to leave the cab and get into the truck. That reeked of possible kidnapping.
So glad you did however for you had a wonderful experience.

I love the birds! I think my future travel will always include some birding. Thanks for the photos.

These are great photos. I'm so happy you are having such a wonderful adventure.

Wow, beautiful photos! What an interesting trip you are having! I think I would have been a wee bit nervous too, but I'm glad you were brave and were able to see the birds.

What an adventure. A condor park, how about that?! That sounds like a highlight of the trip, although you have mentioned several things that sound like the highlights!

You are so adventureous. Your descriptions remind me of our travels during our Peace Corps years...but I was yound then. Don't know that I'm brave enough to face the unknown now.

How are you going to adjust to a "normal" life at home after all the incredible experiences of the last few months in Arizona and Ecuador? Your wander lust may have been turned onto permanent high!