Our second attempt to fly to Quito began with a passenger bus that left our Guayaquil hotel at 9:30 p.m. We were dropped off at International Departures, and since there was no scheduled Delta international flight, none of the airport personnel had heard of us or knew what to do with us. Eventually we were sent through Immigration for a second time; the Immigration people were baffled because we had already entered Ecuador the day before and had our passports stamped. Eventually, again, we were sent to gate 9 of International Departures. No airport personnel were at the gate. I finally logged on to Delta with our confirmation number and learned we were leaving at 12:30 a.m. It was only 11:00 p.m., so we were early.

At midnight the crew showed up. The captain said the weather in Quito was worsening again and we might not be able to land. We boarded at 12:30 a.m. and sat on the tarmac for half an hour before taking off. The half-hour flight to Quito was quick, and then we began our descent. I watched the flight numbers on the tiny TV screen on the seat back in front of me. At 10,000 feet the plane accelerated and ascended to 18,000 feet. The pilot came on the PA and apologized. At 800 feet above the ground he still couldn't see the runway, so he was going to try coming in from the north. We circled for 15 minutes, then descended steeply to 15,000 feet. A few minutes later, another quick descent to 12,000 feet. At 10,000 feet I looked out the window and the lights of the city were immediately below us - we were landing in Quito, elevation 9,000 feet! The passengers applauded when the wheels touched down.

We collected our luggage and went through Customs, found our driver and climbed into the van. Dropped off at our hotel, Hostal la Rabida, with another van passenger's bag instead of one of ours. Asked hotel reception to call the driver, who returned within ten minutes. The owner of the other bag must have noticed!
Our room was tiny but spotless. The bathroom was large and spotless. We unpacked fresh clothes for the next day, fell into bed and slept like rocks from 4:30 a.m. to 9:45 a.m. During breakfast our home exchange partner Lynne, arrived, and we had a nice chat. Usually we don't meet our trading partners, so it was a treat. Our driver, Jorge, loaded our bags into his van. We stopped once at a supermarket to get our initial supplies, once again at the equator to take photos. 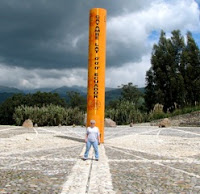 In midafternoon we arrived at our destination: Casa Quinde (Hummingbird House), on the grounds of Hacienda Cusin, in the town of San Pablo del Lago, province of Imbabura, Ecuador.

Notes on the first two days:

1. My fractured Spanish is adequate and I'm glad I brought along a Spanish-English dictionary/phrasebook.

2. I am patient with delays. Anything out of the ordinary adds to the uniqueness of the trip.

3. Diversions to other airports is okay if you don't have a tour group to meet; Delta put us up at a nice hotel and fed us for 24 hours.

4. I get a bit winded going up a flight of stairs at 8,500 feet, and it bothers me a little until I remember I'm at 8,500 feet! We're supposed to take it easy for a couple of days until our bodies adjust.

5. If you're going to be in places where you have to walk a quarter of a mile to the wi-fi hotspot, you can write emails ahead of time to send all at once.

6. Quito is in a beautiful setting - a valley between two mountains. I'm looking forward to spending a day here when we're getting ready to go home. And Casa Quinde looks like Shangrai-La. 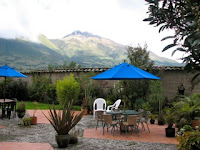 Back yard of Casa Quinda
Posted by Linda Myers at 11:55 AM

Oh, this sounds incredibly wonderful! And yes you ARE at 9,000 feet, but it's a bit easier on you when you are at the equator, since the air isn't as thin as it would be if you were at home at the same altitude. Latitude as well as altitude makes a difference, as I understand it.

You are taking pictures, I hope! I'm looking forward to a pictorial treat one of these days. :-)

Great, You made it Linda. It all looks wonderful and I hope you have a marvellous holiday.

What a great place to be. Like DJan, I'm looking forward to photos. Enjoy!

The adventures of travel are part of its charm. Layovers can be a great opportunity to people watch, if nothing else! I'm glad you take it in stride.

I had been wondering if you had made it yet. I think your accommodations look great. I can hardly wait for more blog posts. Take your time acclimating.

Linda, reading back through all your travels it seems you are having such a great time! I am so glad. Take it all in and have a blast!

a bumpy road getting there but so pretty to be in.

You're having quite an adventure, and you are a lot more adventurous than I am!

I need just an ounce of your patience. I'm not that calm in the face of delays and set-backs. Yet, here you are all settled in Quito on a great adventure!
Looking forward to more.