At the Salzburg train station: what happened to us

We'd planned on a relaxing seven-hour train ride from Lake Bled, Slovenia to Munich, Germany on Tuesday, flying home the next day. I was impressed by the quiet train and comfortable second-class seating, and awed by the Austrian scenery. 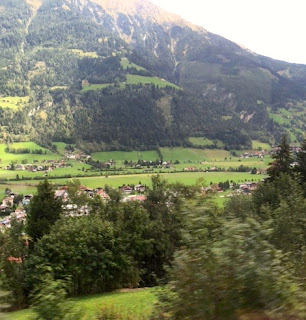 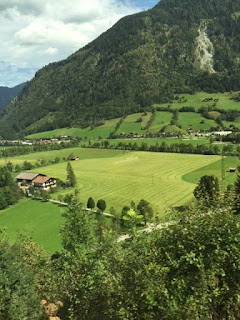 After six hours the train arrived at Salzburg, announcements were made in German, and most people got off. A man passing us said, "Everyone has to get off. This train has been canceled. There are refugees on the track ahead and Germany has closed the border."

We got off the train and descended the escalator to the station. It was full of refugees and immigrants. 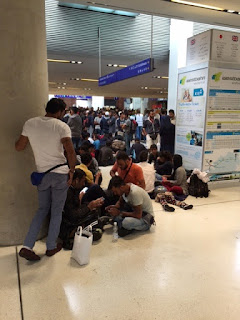 Police stood at the edges of the crowd, but everything seemed calm and nonthreatening. We threaded our way through the mass of people and looked at the departures board. The only train to Munchen (Munich) was the one we had just gotten off, and the description said "canceled".

My vacation-tired brain kicked into emergency mode as I considered our immediate concerns: (1) find a way to Munich; (2) find a way to let our Munich hotel know we'd try to get there but might be late; and  (3) figure out what we should do about our next-day scheduled flight home. In the back of my mind was (4) find a hotel in Salzburg. The concerns were clear but the obstacles to solutions were (1) I couldn't read or speak German and I didn't know where the cities on the departure board were in relation to alternative trains; (2) my phone didn't have international service and there was no wifi in the Salzburg train station.

Then I saw a tall, rangy man speaking to a train security person. I moved toward them. When the conversation ended, the man nodded. I said, "Do you speak English?" He said yes. "What did the man say?" "He said there may not be any more trains going to Munich tonight, but there might be one going to Freilassing. It's just across the border from Salzburg, and from there it wouldn't be a problem to find a way to Munich. If you see a train listed on the board, get to the platform fast, as there will be many others with the same idea." We introduced ourselves; his name was Stefan. We looked at the board. There was a train scheduled to depart for Freilassing in 15 minutes on track 4. I gestured to Art and the three of us made our way across the crowded station to the escalator. 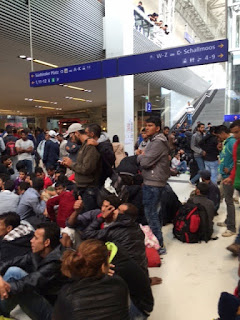 When we got to track 4 I saw the destination sign "Freilassing". Well, I thought to myself, that was easy.

A minute later I looked at the sign. Freilassing was no longer the destination. Stefan and I looked at each other. He said, "I guess that train has been canceled." Down another escalator for another hopeful look at the board. Nothing else was going to Munich.

I looked at my useless iPhone. When I glanced up, a fellow nearby was talking on his phone. I approached him and introduced myself. His name was Phillip and he was Irish. He offered to connect my phone to his by way of his hotspot. I was very grateful! I introduced Phillip to Stefan and they struck up a conversation while I sent a quick email to the Munich hotel to explain our situation. I said we'd try to make it but might be late. Also had time for a Facebook post: "Stranded at train station in Salzburg. Border to Germany closed. Many refugees. Talking to a German who translated and an Irishman with a hotspot."

Phillip told Stefan and me there was a bus leaving the Salzburg station for Munich in 45 minutes. "But can it get across the border by road?" No one knew. I thought it would be better to stay at the train station, where food could be purchased, rather than risking sitting on a detained bus at the border. I get hypoglycemic when I don't eat often enough; I'd already bought two sandwiches and two bottled drinks at a shop in the station just in case. There was only the one shop I could see, and there were many people in that station.

Twenty minutes later "Freilassing" appeared again on the departures board, this time on track 1. We ran to the platform. Again, minutes later the sign changed.

Stefan excused himself, made a phone call, and returned to join us. "I have a friend who lives south of here, near the Alps. He's coming for me and I'll be spending the night with him." I thanked him for his translation services and said I'd pay his kindness forward. Then he left.

Phillip and Art and I discussed our options. We decided to take the bus option, but just for the heck of it, to ask about possible trains at the information booth. Again we crossed the station. This time I stopped, twice, to put my hand on the arm of a refugee woman and say, "Good luck." Both of them said thank you. 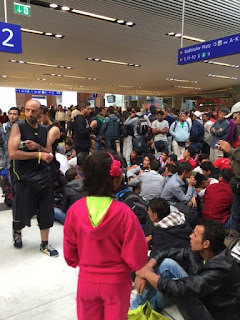 My heart sank when I saw the woman behind the counter. Her face was expressionless as I asked my question: "Can we get to Munich from here?" She looked at her computer monitor and nodded, then tapped a few keys and printed out an itinerary:
None of this made any sense to me except that it was a train with two transfers. From the times listed, it looked like a four-hour journey, not counting time waiting between trains. And what if we got all the way to Worgl and couldn't cross the border there? Still.

As we made our way to the platform, I noticed the wide staircase inside the station was now crowded with a shouting throng of immigrants. For some reason this didn't bother me. I hoped the shouting wouldn't lead to anything further. I don't think it did. 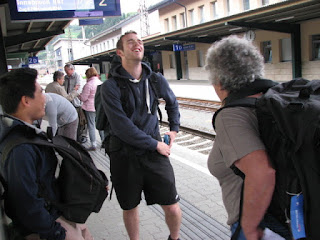 We'd come from Lake Bled in the south. Our destination was Munich via Salzburg. How we actually got there was Lake Bled to Salzburg, then back south to Zellam See and west to Worgl to Munich. 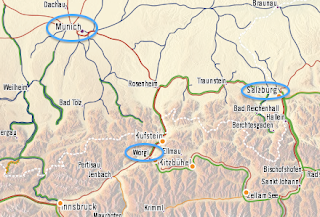 When we got to Worgl, we had a 45-minute wait for the next train to Munich. We found a cafe two blocks from the train station and wolfed down a noodle and chicken concoction. Once we'd boarded the train, an announcement came on in German. A woman was listening. I asked her if she spoke English. She said yes. I introduced myself. Her name was Katharina. She said, "They're going to search the train."

The police came on board. They removed eight people from our car who had no identification papers: one entire family and a student who hadn't brought their passport along. Then the train began its final journey.

Katharina did me another kindness. She called the Munich hotel and told them we'd be arriving around midnight. She advised us to get off the train at the east Munich station rather than the central one. When the train arrived in Munich, I waved goodbye to Phillip. Katharina stayed with us until we got to the correct platform. I gave her a hug and said I would pay her helpfulness forward.

The hotelier had stayed awake to let us in!

So I've got some kindnesses to do in the next few days, to thank Stefan and Phillip and Katharina. It will be a pleasure to do this paying forward.
Posted by Linda Myers at 8:46 PM

What a trip. You did well to stay calm and find help from other friendly travelers. I would have been a complete wreck!

This is where your people skills kick in: knowing how to read people, determine who to ask for help, stay calm and polite, show gratitude, get it done!
This was obviously a very stressful experience that you handled beautifully.

Wow! What a trip! But I'm so awfully glad it turned out the way it did, and with all the kind help from strangers. For some reason this impacted me emotionally; I guess I put myself in your shoes and hope that I would have fared half as well as you did. Welcome home! :-)

Smack in the middle of history! You couldn't have paid money for the adventure you've had getting home. I love the sense of equanimity with which you've faced the challenges and can hardly wait to hear the details in person. The people you meet is one of my favorite things about travel. Have fun with your paying forward of kindnesses. :-)

Fantastic story. I had dangerous encounters both in Italy and Paris. Thankfully, we came out all right. But I just came to the resolute that international travel isn't desirable for me anymore. I refuse to leave the US.
Two years ago my brother and his wife were one block away from the mall slaughter in Africa. So not worth it!

Glad you made it back to Munich. Consider yourself extremely fortunate.
Looking forward to hearing from you again from American soil.

I am so impressed that you handled that so well.

Whew! May we all meet friendly Stefans, Philips and Katharinas on our travels.

I am sorry you had such a dreadful journey across difficult borders. But if you think of the migrants who have been travelling for weeks and months maybe you won’t feel quite so inconvenienced. At least you had passports to allow you to go where you needed to go.

I am also glad you found kind people to help you. This idea of paying kindnesses forward is brilliant. I had never heard of it. It’s good to hand kindnesses on, it will make our world a much friendlier place.

Glad you got home safely.

I sent Friko an email:

I didn't feel inconvenienced. It was just unexpected. I actually was glad I had the chance to be there in the train station, face to face with people so much less blessed than I. I wish there were something I could do for them.

I was very interested to read your post (redirected from Sally's Vashonista blog) as I travelled the same route on 19 September, which must have been around the same time. This is what happened to me: http://wotansdaughter.blogspot.com.au/2015/09/travelling-with-syrians.html