The story at the Budapest train station: what I know

We heard about a refugee crisis at the train station in Budapest when we were still in Poland. The thought crossed my mind that our planned visit to Budapest might be changed, but Katka, our tour guide, didn't say a word other than "We will be fine."

The news swirled around us for the next few days. Some of our travel companions were keeping a close eye on the Budapest story, so I heard their thoughts but didn't explore the situation much myself. One of the travelers, Tom, has a passion for visiting train stations - seems his dad used to take him on outings to train stations, so he has rich memories of such experiences - and he visited the Keleti train station twice during our stay in Budapest. He saw firsthand what was going on there, though it had been several days since the height of the crisis. I thought about going myself, but when I looked at my motives I realized I had more of a voyeur attitude than a humanitarian one, so I'll content myself with a few of Tom's pictures.

On Wednesday, September 9 - five days after the height of the crisis - Art and I attended a 12-step meeting at a church in Budapest. This is what we saw just before we went upstairs to the meeting room: 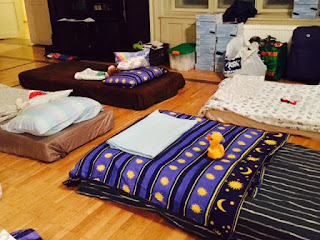 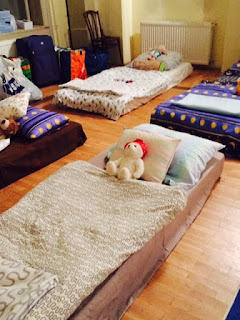 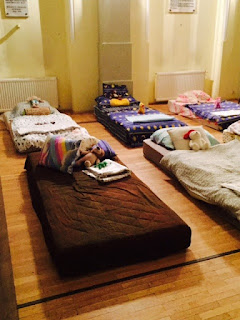 The minister of the church asked us not to take pictures of this room or to identify the name of the church, which has been a refuge for over 70 years. The room was awaiting the arrival of women and children who needed a place to sleep. The minister believed that Hungary was getting a raw deal from the press, when the country was simply trying to do its job to take care of the paperwork for the arriving crowds. His concern was that the media would identify the church and swarm the place as part of the continuing drama, or that men would begin to arrive looking for a place to stay. Usually I don't take pictures when asked not to, but I decided instead not to identify the name of the church.

There's a plaque on the wall of the room - I took a picture of it but, again, am not going to identify the name of the woman honored by it. She was Scottish, and in the early 1940s she was headmistress at this place, which housed Jewish refugee girls. In 1943 the Gestapo came and took her away for harboring Jews. She was sent to Auschwitz, where she died.

I read a story in the online version of Time that provides a good summary of what transpired in the early days of the crisis. You can read about it here.

Katka, our tour guide, had these pieces to add, based on Facebook conversations with Czech friends of hers who had traveled to Budapest to help:
At our 12-step meeting, one man was Brazilian, with a dark complexion. He said he had been at the train station, and the aid people there had thought he was from Syria and had offered him food!

I have a few thoughts based on this experience:
I am so grateful to be learning so much about this part of the world. For me, that's part of the appeal of travel.
Posted by Linda Myers at 4:00 AM

Thanks for this onsite review of the situation in Hungary. I have learned over the years that not everything you read or hear on the news is correct. In fact, it's often blown out of proportion in one direction for the other. You are so fortunate to be able to travel to places like Poland and Hungary and report back. I hope your travels home are safe and uneventful. :-)

I appreciate your first hand report. It's hard to sort out the information from the media...what's hype and what's a real crisis. I agree with you about the benefits of travel. Living outside the US opened my eyes. I am incredibly grateful for the standard of living in the US, but I also know our lifestyle comes at a cost.

I appreciate you comments on this. Unfortunately this crisis is so much worse than we all know at this time. Just today there were videos released from the huge detention camps which is where my ministry provides help. Would that people got as upset about this poor displaced group as much as a killed lion.

This post was informative about the way Hungary is responding to the huge numbers of people arriving in their country. As usual, churches do a lot of good work.

Nothing beats a report right on sight. Thanks.

I really appreciate this...both the specific facts about the situation in Hungary and your broader observations. I heard a public radio report about an office somewhere--I think it was Hungary--where a few staff people were working very long and crazy hours just trying to do the paperwork. But as you note they were blamed for the backlog. It's all so easy to criticize from a distance!

Nothing like seeing a situation with such immediacy and with so many nuances. I really appreciate getting your on-the-spot, even-handed perspective!

Those made up beds in the church express so much love and caring. Fortunate are those few who end up here.
People get lost in the overwhelming flood of those fleeing terrorism. The fear they feel leads to chaos. It's so very difficult for officials to sort it all out. Then the fear spreads to those being overwhelmed by the flood. Jobs mean livelihood.
Nothing is simple, or as one=sided as it is often portrayed. Thanks for sharing what you learned.

The beds are beautiful, but they are empty. The camps are full, with caged refugees who are thrown(!) a loaf of bread each day. Hopefully that church will send its members to bring refugees to sleep in those beautiful beds.