I was looking forward to visiting these two camps in Poland and I'm glad I went. Both have been established as memorials to the millions of Jews and others who were killed by the Nazis in World War II. Walking through the narrow corridors of Auschwitz and seeing the grim reminders of the dead were memorable.

We heard about the overloaded trains arriving at Birkenau. The healthy men were selected to live a little longer than the women, children and old men who walked immediately to the gas chambers they were led to believe were showers after their long and crowded journey from all over Europe. We stood in the very spot at Birkenau where the selection process took place. We walked through the gas chamber and the crematorium.

My husband Art took these photos at Auschwitz. Those Jews killed thought they were simply being relocated when they got on the trains. They brought their most essential items from home. When the camp was liberated at the end of the war, the soldiers found the items. 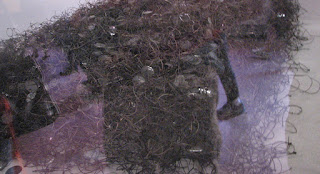 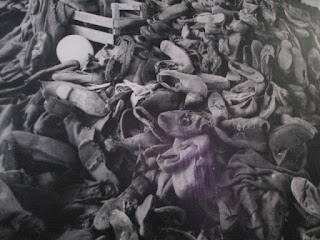 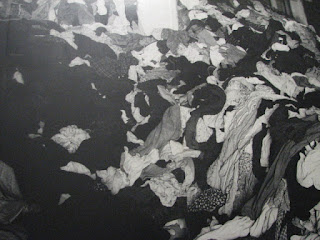 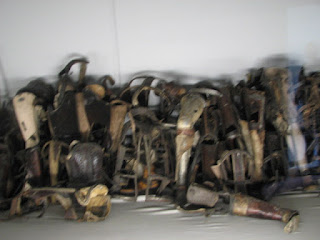 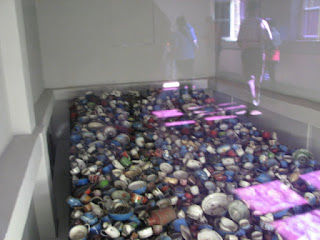 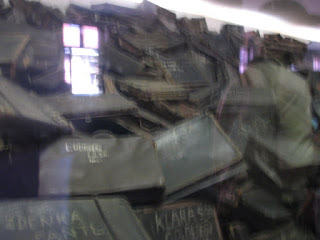 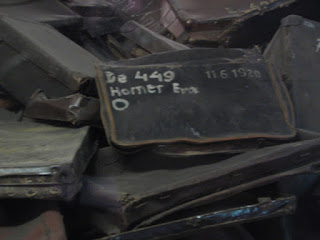 One of my distant relatives? 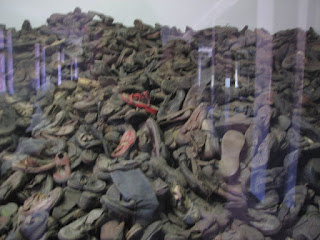 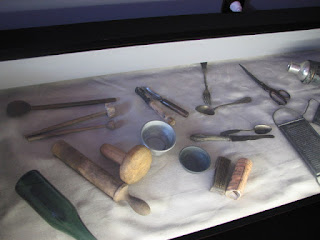 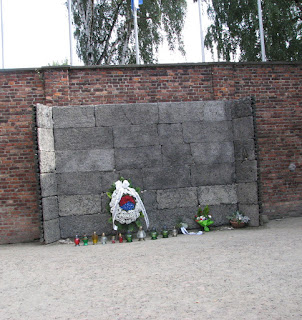 The "black wall". Prisoners considered enemies faced this wall and were shot in the head. The smaller wall was erected so the brick wall behind it would not be damaged by bullet holes. The shooting was done by SS officers and the bodies were removed by Jewish prisoners.

Auschwitz had been a military barracks prior to being a camp for prisoners. Birkenau, however, was built specifically as a death camp as the number of prisoners exceeded the capacity of Auschwitz. 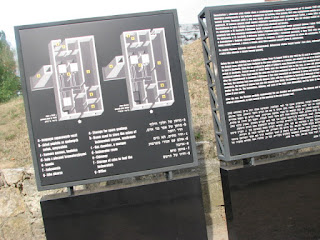 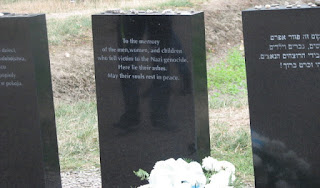 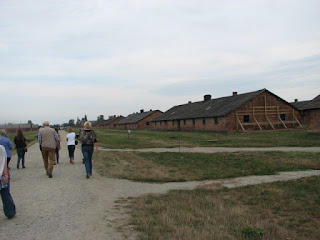 The long walk to the crematorium, alongside prisoners' housing 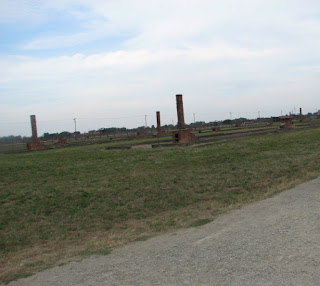 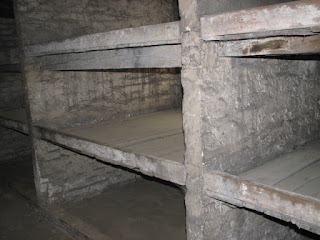 Sleeping structures for female prisoners -four to a pallet

I have some thoughts. 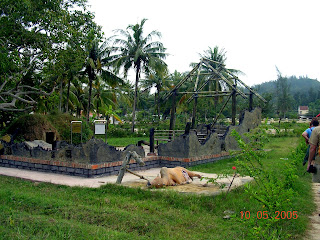 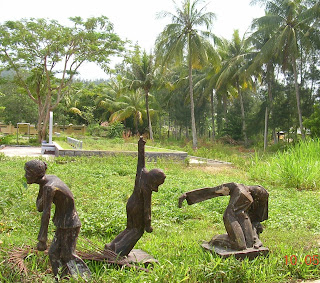 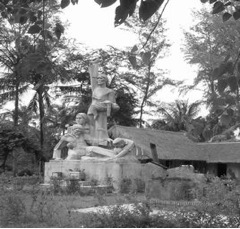 I also refuse to take pictures of the crematoriums or the ovens either at auschwitz and Dachau. In fact, I refused to go in those rooms, so I appreciate your husbands response. I agree there have been many other mass killings, however none so concentrated, well planned, and state run-part of the status quo if you will. Which is why to my mind this differs from Vietnam or even Bosnia.

My heart is heavy from reading this. Many years ago when I was a young mother, I became obsessed with the Holocaust and read anything I could find about it. I had forgotten I did that until I read this post and saw Art's pictures. I also saw Schlinder's List once and could hardly stop crying for days. I am not interested in visiting those places, but I am glad you did and reported on it. Thank you.

I shook for hours after I saw where the pile of ashes was at Birkenau. I still weep thinking of it. That is where my relatives, whom I never met, were murdered.

Very touching and hard to imagine. Thanks for sharing.

It's good to have these places preserved and memorialized. People forget, disbelieve and deny. Evidence is proof.

That made my stomach drop--such horror. But it is good to preserve--lest we forget.

What an amazing trip you're having. I can hardly wait to hear and see more in a few weeks! Safe travels home.

Linda I have been enjoying the heck out of your Europe blogs. I read them all. The pictures and your wonderful clear descriptions add such verve to the personal narrative. You really have a master recipe for the subjective + the objective in these accounts.
that may have made no sense. I am doing homework at present and my thoughts are shortened to note-taking, lol. See why I NEED your delicious mind-candy blogs?

Devastating. I'm not sure I could handle going there.

It was for me a very powerful visit when we went. We were not allowed to photograph inside buildings then. We had a group of jewish young people wearing Star of David flags who sang chants as they went into the gas chambers/ crematorium. Spine tingling stuff.