Fourteen members of our tour group visited the salt mines at Wieliczka. The place had been recommended by a friend of mine. Wikipedia has a good description, so I give the site credit for these words:


The Wieliczka Salt Mine (Polish: Kopalnia soli Wieliczka), located in the town of Wieliczka in southern Poland, lies within the Kraków metropolitan area. The mine, built in the 13th century, produced table salt continuously until 2007, as one of the world's oldest salt mines still in operation.
The mine's attractions include dozens of statues and four chapels that have been carved out of the rock salt by the miners. The oldest sculptures are augmented by the new carvings by contemporary artists. About 1.2 million people visit the Wieliczka Salt Mine annually.[1]
The Wieliczka salt mine reaches a depth of 327 metres (1,073 ft) and is over 287 kilometres (178 mi) long. The rock salt is naturally grey in various shades, resembling unpolished granite rather than the white or crystalline look that many visitors may expect. During World War II, the shafts were used by the occupying Germans as an ad-hoc facility for various war-related industries. The mine features an underground lake; and the new exhibits on the history of salt mining, as well as a 3.5 kilometres (2.2 mi) touring route (less than 2% of the length of the mine's passages).
We descended 350 steps into the mine. Everything is well lit and structurally well supported, so I felt safe. 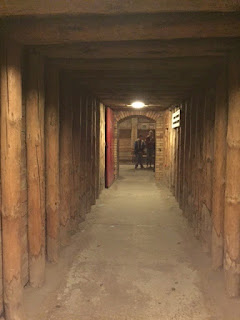 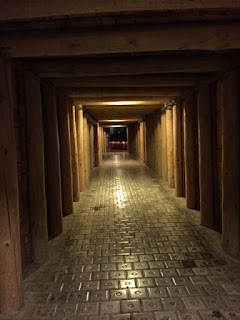 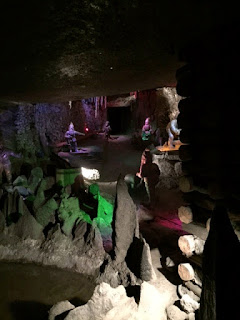 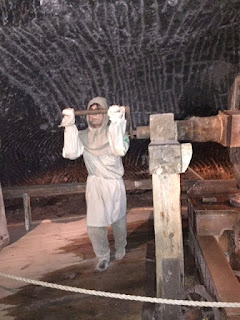 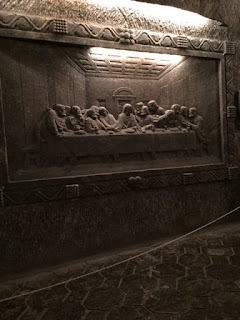 Descending the stairs was easy but the next day my quads and calves were very sore.

In the afternoon our group took a tour of the Schindler Factory. The movie "Schindler's List" memorialized the story of Oskar Schindler, who hired 1,200 Jews to work in his Krakow factory and protected them. The factory was converted to a museum several years ago, and it's a powerful representation of the history of Krakow before and during the war. Many images, touch screens, sounds, creaky floors, voices. It was kind of an immersion experience; I felt like I was there, at that time and in that place. An absolute must-see in Krakow.
At historyplace.com, I found additional information:

In 1939, Oskar Schindler set up a business in an old enamel works factory in Poland, employing Jews from the Krakow Ghetto as cheap labor. As the Nazis intensified persecution of the Jews, Schindler increasingly feared for the safety of his workers. He managed to convince the Nazis his factory and thus his Jews were vital to the German war effort and prevented their deportation to the death camps of the East. Following the liquidation of the Krakow Ghetto in March of 1943, his workers were relocated to Plaszow concentration camp, a forced labor center under the brutal command of Kommandant Amon Goeth. Schindler helped his workers to survive their confinement at Plaszow by befriending and bribing Goeth. Toward the end of 1944, Goeth was ordered to liquidate Plaszow. Schindler saved nearly 1200 Jews from certain death by convincing Goeth to allow him to relocate them to Brunnlitz, Schindler's hometown, where they were eventually liberated by the Soviets. Following the war, Schindler stayed in contact with the Jews and travelled each year to Israel to be honored by them.

As usual, I was through the museum in about an hour; Art emerged two hours after me. Neither of us took any photos inside the museum; its layout of vertical screens and labyrinth of walks made picture taking impossible.

On our way back to the hotel we stepped into a sidewalk restaurant, where I had one of the finest meals of my life: chicken breast in a bed of green lentils, pureed carrots and cauliflower. Delicious! 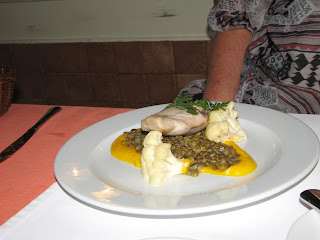 My father used to say he was off to the salt mines when leaving for work. He worked at IBM so I thought it was just an expression.

Schindler's List was one of my favorite movies about the Holocaust. I am sure glad you had a chance to visit that place, along with the salt mines. What a great experience you and Art are having; I'm enjoying the vicarious thrill of being there. :-)

What a memorable trip you're having! It must have been so fascinating and chilling to see and walk through the salt mines and also Schindler's Factory. I had no idea it was a museum! So many atrocities along with so much courage. I'm loving taking this trip with you in a very real sense!

I saw the movie Schlindler's List but i didn't remember much of the circumstances. thanks for the history refresher.
We visited an ancient salt mine in Austria, where we descended on polished oak slides. Weee! Down, down into the mine. It is still a working mine too, but the mining process is now by water extraction.