Where are we, really? And who are these people?

We're nearing the end of our journey. We've had a couple of days to relax - first in Rovinj in Croatia at a lovely island hotel. 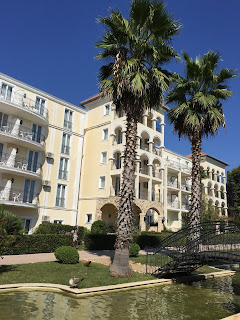 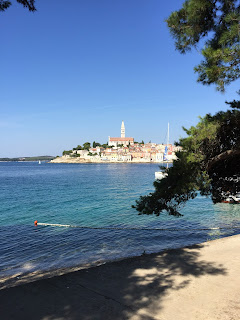 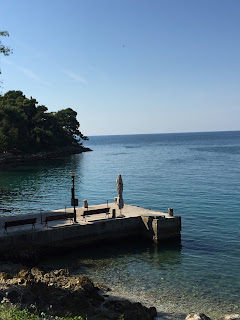 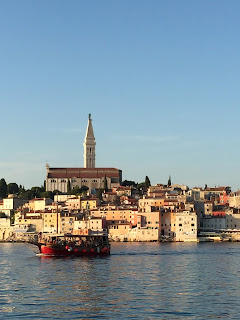 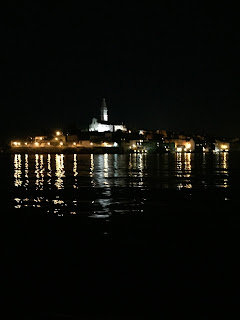 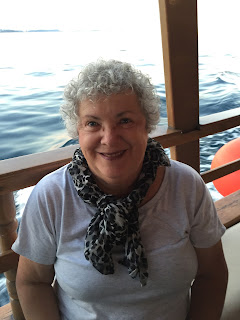 Now at Lake Bled in Slovenia, on a pouring-down-rain day. 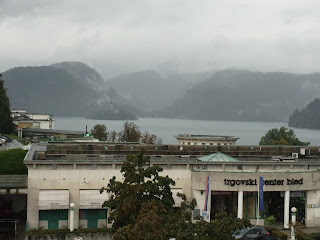 The description of our Best of Eastern Europe in 16 Days says we'd be visiting the Czech Republic, Poland, Slovakia, Hungary, Croatia and Slovenia. Twenty-five years ago, the same travel territory would have been Czechoslovakia, Poland, Hungary and Yugoslavia. What's the difference?

Our tour guide Katharina is Czech. When she was born in 1975 Czechoslovakia was one of the Communist bloc countries. She remembers the limitations of that time; for example, she said if you saw a line in front of a shop you would stand in the line, and when you got to the front you'd find out what the place was selling! Travel outside the country was very difficult; she suspected her father was on a blacklist since he had been part of the protests of the late 60s. But, she said, for some people communism was okay because everyone had what they needed.

Our driver, Sam, is Slovenian. When he was born in 1985 his country was Yugoslovia. In the 1990s, after the death of Tito (Josip Broz) in 1980 and the end of the USSR in 1989, the territories of Yugoslavia - which had been established after World War II based on ethnic and historical lines - had a bloody war as part of their separation into Slovenia, Croatia, Bosnia and Herzegovina, Serbia, Montenegro and Macedonia. On our drive through Croatia, we could see many houses pockmarked by bullet holes from that recent conflict.

So four countries are now eight. All of them have Slavic populations (as does Poland, which we also visited). These tribes migrated from the Urals in about the ninth century. Their languages and cultures are similar but not identical.

Hungary was the only non-Slavic country we visited. Its people descend from the Magyar tribes which, it is believed, originated in Central Asian in the area now known as Soviet Turkestan.

I was in our room this morning when our housekeeper arrived. We chatted for a few minutes in my only language: English. She speaks five languages. I said I wish I spoke more than one. She said, "We are small countries."

I think about the five Slavic countries we visited. All have had a fractured history, being overrun throughout the centuries by aggressive empires and nations. Their borders have changed - and sometimes disappeared. Yet the citizens of each of these countries are loyal to their own place. Or is it their own tribe, their own people?
Posted by Linda Myers at 3:51 PM

It's hard for many of us, me included, who live in the great melting pot, the USA, to understand why people of many countries still retain their tribalism and their centuries old hatreds. I'm glad there is stability now in that part of the world after the horrors of the wars that broke those nations up into their current boundaries.

I had a Yugoslavian friend during the 1980s and saw how she suffered over the wars in her part of the world. And when I went to Macedonia in 2009, I saw how there is still so much animosity still between Greece and Macedonia. In fact, I don't think Greece even recognizes Macedonia as a separate country. Your trip has been very instructive to me. I'll be glad when you're home safe and sound, though. :-)

All these changes make it harder and harder to learn geography! Thanks for sharing your trip. I learned a lot!