Our travel group tours in Prague

We've found good, inexpensive places to eat! Here's lunch from yesterday, at a pho place a couple of blocks from our hotel. 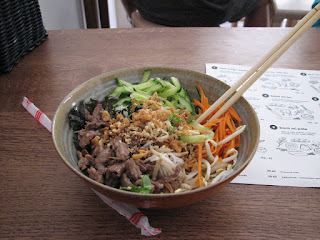 We've walked nine miles since yesterday afternoon with our Rick Steves travel group. Yesterday we explored Old Town and today we took the subway and a tram to visit New Town across the river. I took all kinds of pictures but most did not turn out because of the crowds. I'll post a few here anyway.

The first four were taken last night. After a walking tour through our neighborhood and Prague's colorful Old Town Square, we continued to the Josefov neighborhood and learned about the rich heritage and enduring troubles of Prague's Jews.  The group walked across the Charles Bridge to a restaurant in New Town. It's a memorable place, the bridge: street musicians; prostrate beggars; entwined couples; and statues. Plus tourist and locals enjoying the hot summer night. 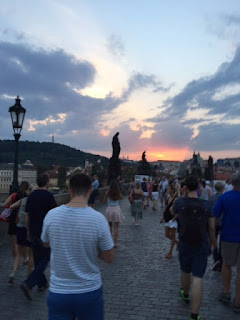 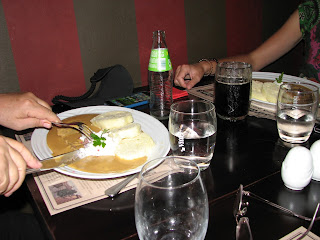 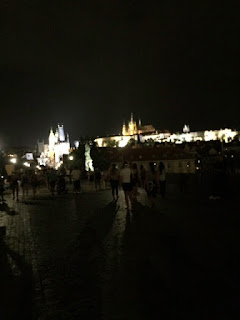 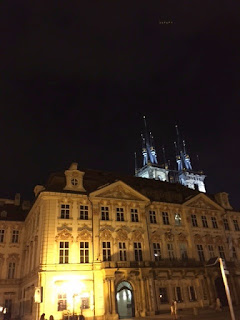 In spite of the crowds, we felt completely safe. Our guide Katerina Svobododa told us that there are no dangerous neighborhoods, but to be careful of pickpockets.

Today we took public transportation (the metro subway and tram) to the Prague Castle. Originally used by kings, the complex has been expanded over the centuries in varying architectural styles. It is now used by the Czech president. 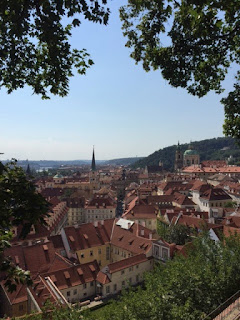 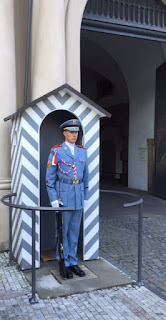 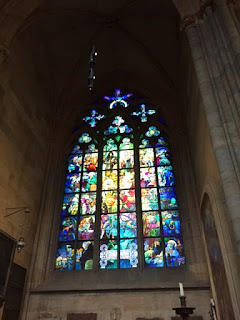 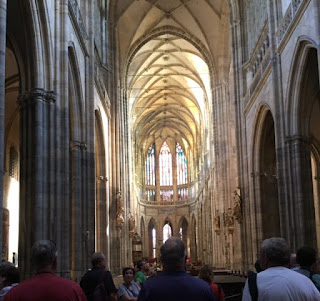 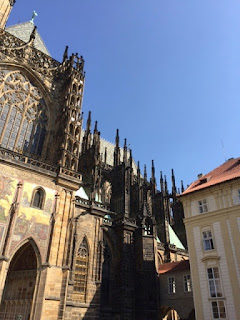 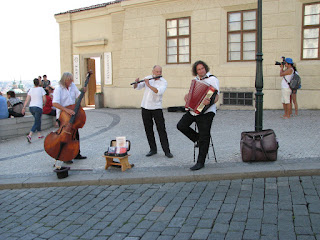 I admit I am already "all churched out."

This activity was a real temptation but we successfully resisted it. 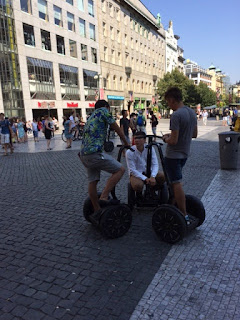 We rode Segways several years ago in downtown Seattle. They're easy to ride, and fun. Not sure how it would all work out on cobblestones, though. Art says, "Probably better than thin-soled shoes."

And here is today's lunch. Art ordered a salad with shrimp and I had ricotta-stuffed ravioli. 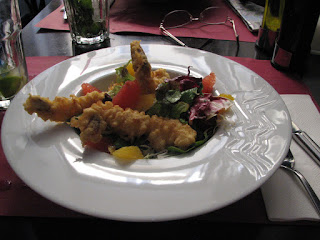 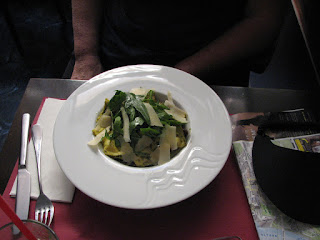 Prague is a beautiful, interesting, historical city. I commented to Katarina that when I was younger, "Eastern Europe" was behind the Iron Curtain and I didn't know much about it. Like "darkest Africa" - it was there, but out of sight. We're lucky to be seeing it now.

When we were living and road tripping in Europe my son's mantra was "Oh, Look, another old church".........meant of course facetiously

Yummy looking meals, all. But you are getting plenty of exercise to work it off!

Enjoying your posts - travel is so interesting, thanks for sharing!

We haven't been to Eastern Europe and probably won't get there now. I do love the learning that comes with traveling.

Yes, eastern Europe was off-limits when I took several months between jobs for a grand tour, back in my 20s. I always enjoy your posts but Prague is especially appealing to me. Thanks!

You truly are fortunate to see those areas of the world that we not accessible for so many years. The food, the history, the people of Prague continue to fascinate me. Thanks for being faithful in sharing.